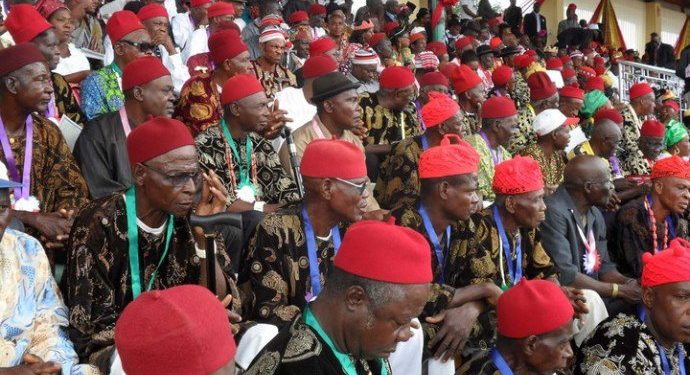 By January 11, 2021 a new leadership of the Ohanaeze Ndigbo, a pan socio-cultural group of the Igbo would emerge after its election. According to the rules of the group, it is the turn of Imo State to produce the next leader of the group. Consequently, many prominent Igbo sons are throwing their hats in the ring to win the coveted crown.

However, emerging facts seem to indicate that there are attempts from some quarters to influence and politicize the prestigious office. This many observers hold would not augur well for the group if not nipped in the bud. It is sad to remark that virtually everything about leadership at all levels in this country has been politicized.

Politicians have been identified to be the major obstacles to development given their score cards in governance which has left the people worse than they met them. They are always seeking to grab at every opportunity just to satisfy their selfish ends. A socio-cultural organization like Ohaneze which is a rallying force of the Igbo should not one to be pocketed by any one person.

There are reports that the Imo State government has endorsed a particular candidate for the exalted office for reasons best known to it and this has raised agitations among other aspirants. The aspirants jostling for the top job include Dr. Joe Nworgu, a former Secretary-General of the group, Dr. Chris Asoluka, a former vice president and current co-chair of South-East South-South Professionals, Chief Goddy Uwazuruike, former president Imo chapter of Ohanaeze.

Others are Prof Chidi Osuagwu, and former Vice Chancellor, Imo State University Prof Ukachukwu Awuzie, and Prof George Obiozor. These are eminently qualified Igbo sons who should be given a chance to have a shot at the position. Records indicate that the established practice is to conduct election for each position.

News Echo wishes to condemn in its entirety the idea of throwing up a candidate through a consensus arrangement. This no doubt is divisive and is a recipe to engender crisis within the group. There are myriads of issues bedeviling the organization. It cannot afford to stomach more at the moment when it should focus on resolving a lot of challenges.

We urge that the six candidates should go through the electoral process rather than foist a candidate through clandestine moves that smacks of desperation. Transparency and integrity should be the watchword. Any wrong step at this moment will likely get Ohanaeze to falter and possibly fall.

The out-going Ohanaeze leadership relatively speaking is adjudged to have done very well in spite of the myriads of the issues bedeviling the Igbo nation. They have raised the bar and it is expected that nothing better can gratify the desires of freedom thirsty and development conscious Igbo group which has never stopped crying of marginalization.

The Igbo have contributed significantly to the development of the Nigerian nation in virtually every sphere of life. In spite of this it is not any close to attracting what is due to it in terms of development. The Igbo land is crying for infrastructural development, there is discrimination in political appointment, and there are oppressive economic policies that hunt its business men

It is on account of the situation it has found itself that the agitation for a separatist nation through the youthfully populated Independent People of Biafra (IPOB) have since reenacted the agitation for a Biafran state which culminated into the civil war in the sixties. The circumstances that led to the war seem more pronounced as at today.

The Igbo need a man who understands the challenges of his people. Igbo need a voice that will speak truth to power and be ready to take bullet on behalf of the people. It does not need politicians who can compromise and sell out the destiny of the people. So many embarrassing situations have been meted out to the South Easterners for which the Igbo leaders have appeared helpless even to the point of opening their mouth to condemn. Cowardice among the leaders is only exposing the Igbo people. The people need a courageous person to speak and fight for them.

Whosoever should emerge as the Ohaneze leader should be a unifying force for the entire race, must have acceptability first among its people before the outside world. His charisma should be able to galvanize other stakeholders and be capable of setting agenda as well as working collaboratively with the governors, legislators and other leaders to champion Igbo cause.

Given the precarious political position in the country as at present, this is the period to fortify the group through a strong stable leadership that is capable of representing Ndigbo creditably. This is an opportunity that must be maximized. There is no better time to do so than now.