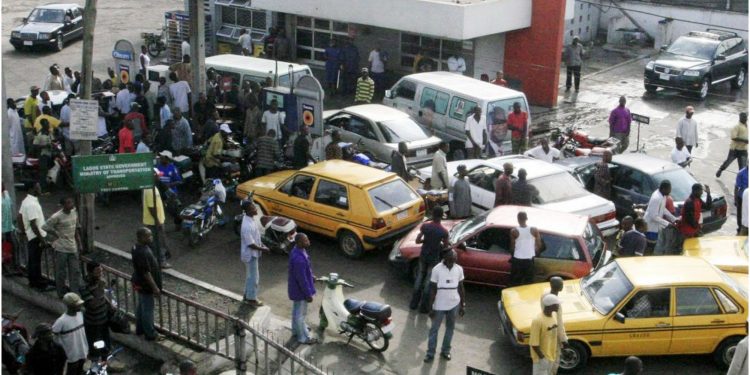 Since the beginning of this week, fuel scarcity has gradually began to creep into the Nigerian society as users spend hours waiting on queues in filling stations at various locations in the country to buy the product.

The scarcity of Premium Motor Spirit (PMS), popularly known as petrol or fuel usually affect businesses which depend on the product for power due to the erratic supply of electricity in the country.
Similarly, the number of commercial vehicles plying the roads becomes less compared to a regular business day, leaving many passengers stranded at various bus stops.

While some are forced to pay extra fares for transportation, others may opt to trek to their respective destinations, including offices, markets, and homes.

According to IPMAN, the situation across the country is as a result of the operating environment which has become hostile to their businesses.
The association specifically stated that the petroleum marketers were not on strike as feared but have found it difficult to operate considering the dependence on diesel whose price has skyrocketed.

“Members of Independent Petroleum Marketers Association of Nigeria IPMAN have shut down their stations, not because we are striking; we are not on strike,” he said.

“Rather, the business environment has been very hostile to us such that we can no longer do business under this condition. For you to load a litre of petrol, you pay in N162 per litre.”

The IPMAN official was quick to say the situation had nothing to do with the removal of subsidy or deregulation of the petroleum sector.
He listed the high cost of buying petrol at the depots, the high cost of diesel for running their station, and the increased cost of freight as the major factors responsible.

The group stressed that it was no longer feasible to sell the product at the recommended price of N165 to a litre, adding that the landing cost of petrol was between N175 to N178 naira to the litre.
“You now have to add the cost of transportation which is between N6 to N8, depending on the distance within Lagos,” he explained. “If it is outside Lagos, it is much more than that.

“So, if you add N8 to N162, you already have N170 and the government which is the regulator wants us to sell at N165; we have not even added the charges at the depot and the running cost at our stations.”

“You know what diesel says now, and you know how epileptic power supply is; we run on generator, using diesel at N800 per litre. There is no station in Lagos that uses less than 50 litres (of diesel) per day.
“So, our members can no longer sell (petrol) at N165 per litre; in fact, there is no reasonable person in this business that can sell below N180 per litre, so it is not as if we are on strike,”

It has become common knowledge that each time there is widespread scarcity of petroleum products, the government passes the blame to something or someone else. It is either due to major pipeline damage by vandals, militants’ attack on a major flow station, or sabotage by shylock importers.

Interestingly too, each persistent scarcity is accompanied by a corresponding hidden plan by the authorities to increase the pump prices of the products. Thus the “appropriate pricing” of petroleum products, since 1991, has become a major reason for the government’s endless upward review of the price of fuel, especially Premium Motor Spirit (PMS) or petrol.

In December 1993, the pump price of PMS rose from 70kobo per litre to N3.25. At the same time the price of Kerosene, another essential by-product of crude oil, was moved from 50kobo to N2.75 while the cost of diesel increased to N3.00 per litre. Barely a year after, the General Sani Abacha administration, in 1994, adjusted prices again to N5.00 per litre of petrol, N3.00 per litre of kerosene and N3.50per litre of diesel.

We, therefore urge the Federal Government, Nigerian National Petroleum Corporation (NNPC) and the Pipelines and Products Marketing Company Limited (PPMC) to urgently institute major discussion with the Independent Petroleum Marketers Association of Nigeria (IPMAN) on how best to avert the imminent scarcity and as well curb further