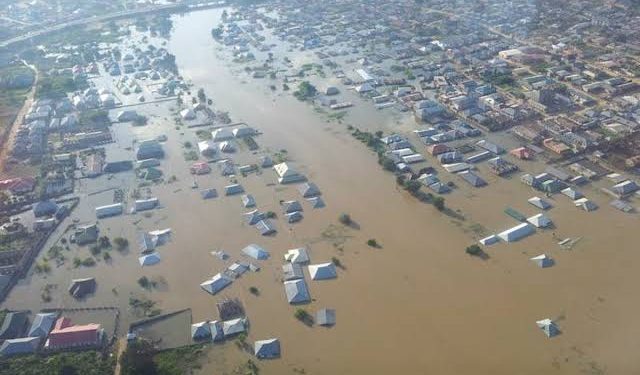 Though many environmental problems threaten the world but flooding is considered to be the most devastating natural disaster worldwide.

Flooding is excess water flowing onto land which is usually dry e.g. when rainfall exceeds absorption capacity of the soil, which in turn causes significant environmental consequences.

The rainy season in Nigeria this year, 2022, was especially harsh with heavy rains producing deadly and destructive flooding in many areas in the country states. In October, flooding in the country’s south submerged homes and farmland, and displaced hundreds of thousands of people.

Emergency management agencies reported that floodwater in most of the Southeastern States has displaced more than 600,000 people. The flooding has also been deadly. On October 7, a boat capsized and killed dozens of people trying to escape rising waters.

A certain report maintains that ‘the rate of flood occurrence in recent times has been unprecedented, with over 70 million people globally exposed to flooding every year, and more than 800 million living in flood-prone areas.’

Severe flooding has also affected other parts of Nigeria throughout the 2022 rainy season, which generally spans through April to October.

In the northeast, outbreaks of cholera are being attributed to water sources that have been contaminated by floodwater.

According to news reports, the flooding in Nigeria this year was the worst on record since 2012.

Flooding is the most common disaster in Nigeria. The majority of Nigeria’s states are increasingly suffering from annual flooding during the rainy seasons caused by increased precipitation linked to climate change.

Flooding is a geo environmental hazard recorded every year in most region of the world.

Though, inundations by extreme floods cannot be totally avoided and maybe with the effect of climate change and their occurrence will increase.

However, insensitivity to its occurrence invokes an imminent disaster. Absolute protection is both unachievable and unsustainable, because of high costs and its inherent uncertainties.

Nevertheless, abilities to mitigate flood disasters, cope with and recover from the effects are attainable but needs urgent attention.

This evolves a well thought-out strategies and adaptation measures which can be adopted by all especially in the flood prone areas.

Localized flooding occurs many times a year in many but mostly in informal and mismatched settlements.

There, are few drains (or those that exist are blocked), most of the ground is highly compacted, paved and pathways between dwellings become streams after heavy rain.

Urban land use allocation has all along been begged on economic factors devoid of environmental concerns which play a vital role for sustainable urban development. Structural and non-structural measures are adopted as a control, mitigation and coping strategies to ameliorate flood impacts.

Unlike some natural disasters, rainfall flooding can be controlled with proper planning and the provision of necessary infrastructure but Nigeria’s flooding is mainly human induced with current poor urban planning practices and inadequate to non-existent environmental infrastructure contributing to and exacerbating the issue.

The absence of a national Flood Risk Management (FRM) strategy or comprehensive flood risk maps, for example, are indicators of the lack of attention paid to Nigeria’s flooding problem.

However, to make any progress and ensure sustainable development, the anthropogenic causes of the floods in Nigeria need to be addressed; this requires reviewing urban and environmental planning and management and integration with FRM.

The Government and concerned stakeholders have a key role to play in controlling flooding by putting the necessary infrastructure in place as a control measure.

Resident in shock as Gunmen murder vigilante Boss, 2 others In Anambra

Resident in shock as Gunmen murder vigilante Boss, 2 others In Anambra

Why I flagged off rural roads construction – Uzodimma