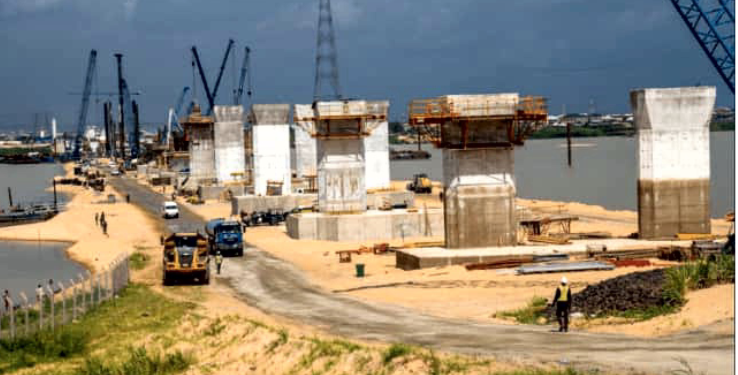 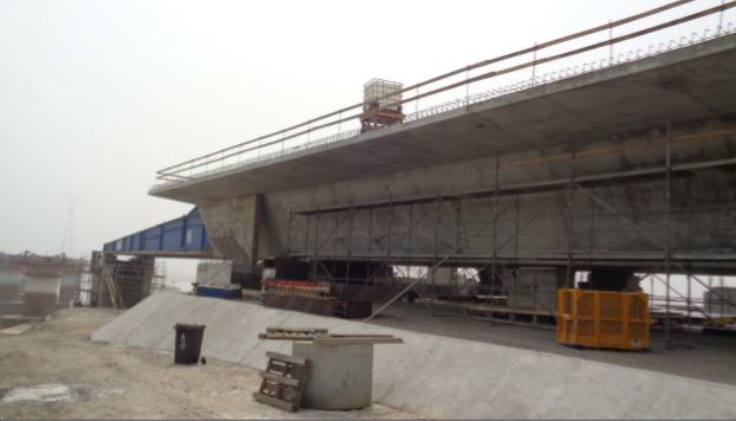 The Onitsha/Asaba existing bridge over the Niger River dates back to 1965. A connecting major road with the cities of Asaba on the west bank and Onitsha on the east bank and is part of the Trans-African Highway between Lagos leading all the way to Mombasa in Kenya, in addition to being the main east-west connection within Nigeria.

However due to the increasing traffic activities going on this bridge, hence the need for a second Niger bridge as a means to decongest the traffic and improve easy way of transportation thereby strengthening the entire region generally.

THE 3 SECTIONS:
West Approach (755m, 14 fields with 55m span each), East Approach (205m, 4 fields) and Main Bridge (630m, 5 fields with a maximum span of 150m) are being built in parallel using the different production methods “clock push” and “cantilever”. Since the water level of the Niger varies by about 10m between the dry and rainy seasons, the foundation work in the river is carefully planned and coordinated.

Additionally, soil improvement measures required for road construction, vertical drainage and horizontal dam base reinforcement are implemented in order to guarantee the load-bearing capacity and to accelerate the settlements of the sand dams, which are 6 m high on average.

The Second Niger Bridge project was initiated by the former President Goodluck Jonathan, and the vision has been sustained by the present government of President Muhammadu Buhari.

The bridge is being constructed across Nigeria’s Niger River and is intended to ease traffic congestion and will span from Asaba to Ozubulu and Ogbaru areas.

The project is undertaken on behalf of the Nigerian federal government by the Federal Ministry of Power, Works and Housing jointly with the Nigerian Sovereign Investment Authority.

The project is being developed through a Public Private Partnership involving Julius Berger –NSIA Consortium as a Design, Finance, Build, Operate and Transfer (DFBOT) model to cost US $653m with the Federal Government contributing US $150m while the consortium will raise the rest of the funds.

To be sure, the construction of the Second Niger Bridge well-survives the delay in the approval of the Nigerian 2019 national budget, the government established a fund ‘Presidential Infrastructure Development Fund (PIDF)’ from where it finances the project.

Work capacity of the project has employed between 1000 and 1300 workers optimally engaged. According to Engineer Adeyemo Ajani, the project currently is 46% complete. The new Niger Bridge upon completion will also facilitate vibrant commercial exchanges especially in the host South-East region of the country, Nigeria

Although the contract was first awarded to Julius Berger PLC in 2016 and construction work commenced in November 2017, progress has been slow
House of Representatives Committee on Works had frowned at the slow pace of work by Julius Berger Construction Company in the handling of the bridge.

This made Mr President in his address on October 8, 2020, during the inauguration of the Advisory committee on the Niger Delta Development Commission assured that the Second Niger Bridge which is at about 46 percent completion, will hopefully be commissioned before the end of his tenure in 2023.

Julius Berger plc has also given assurance that the 2nd Niger Bridge will be completed in February 2022.

Friedrich Wieser, project supervisor of the company, gave the assurance when minister of works and housing, Babatunde Fashola, visited and inspected the project.

According to him, the project was 33 percent as against 20 percent when the minister visited last, pointing out that the company had mobilised 1300 workers and 425 equipment to the site to meet the target scheduled.

Wieser said the work on the seven kilometers access road world be completed in September this year. News echo Correspondent reports that the said road still remains uncompleted although workers at the site have attributed the slow pace of the work to the corona virus pandemic.

He affirmed that compensation to the host community was not the responsibilities of the contractor but rather the employed, saying, “We never have any disturbance because of compensation.”

A popular public affairs analyst, in trying to prepare a suitable analogy of the filthy politics encircling the proposed Second Niger Bridge, described it as “Ogbanje – the mythical ill-fated lad that keeps dying and being reborn, repeatedly. It can also fit in the allegory of the witch crying in the night and a child dying in the morning.

“As in Ogbanje that raises the hopes of the parents at birth and dashes same, as it dies shortly, the Bridge has become a weapon to lure, rape and dump unsuspecting Nigerians, especially from the East, by various governments at various time in the country’s history since 1970.

Over the past two decades, the yearnings for a new Niger Bridge have been stifled into a tool for cheap politicking and craftiness among the Nigerian politicians. Votes from the South East are specifically interchanged with the promise of immediate construction of the Second Niger Bridge, when they win.

Then, as a people, hungry for development, we would give our votes, hopeful that we would also soon flaunt our new bridge on the social media.

Sadly, billions of Naira would be announced on the mainstream media, to perhaps stir up hopes, and that would be it for another four years. From the regime of former President Olusegun Obasanjo, to the abandonment by the present administration, the stories remain as new as they are disheartening.

Though credits would be given to former President Goodluck Jonathan for approving contract for rehabilitation of the current Niger Bridge, the lasting solution is still staring boldly into our eyes – a Second Niger Bridge.

The social and economic importance of the River Niger Bridge amplifies the urgency of a new and more sophisticated one.

The South Eastern part of the country, Anambra State especially, has become a fast-growing economic beehive of Nigeria, the fourth largest economy in Nigeria.

The Onitsha and Nnewi Markets have proven a highly competitive spot for national and international business transactions. In fact, the Onitsha Main Market, once the largest market in West Africa, stands grandly on the shores of the River Niger.

A new Niger Bridge will not only simplify and boost business check-ins into the South East, it will add to our national collections, and most importantly, it will save lives and ease the growing burden on the current one. Just like the new China bridge, a new and better Niger Bridge will open up boundless trade, tourism and vocational opportunities for the geopolitical zone and the country in general.

CHALLENGES
As at the time the second Niger Bridge project in March 2014 was conceived the bridge was expected to be completed by March 2018 and cost NGN117 billion.

Soon after construction began, however, a number of issues began to emerge. First and foremost among them were the nation’s larger financial issues. Nigeria depends on oil revenue for a majority of its government funding, and falling oil prices began to severely impact the nation’s financial position at around the time the project was announced.

This put the Nigerian Sovereign Investment Authority (NISA) in an unstable position and rendered it unable to contribute to the project as originally intended. As a result, the government was forced to seek alternative funding sources, a search that is still ongoing.

Officials are optimistic about finding additional funding, noting that several foreign investors have expressed interest in the project due to its well-structured nature and significance for Africa’s largest economy..

There have also been accusations of mismanagement and cost overruns. Preliminary consultancy and project viability work has been lengthy and expensive and reports emerged in September 2015 that NGN140 billion in state funds intended for the bridge were missing from the sovereign wealth fund, though the Nigerian government refuted them.

According to government figures, NISA has reportedly spent over NGN440 million on international consultancy projects but the project has still not received all the necessary regulatory permits to attain private capital and proceed with construction.

The delay has frustrated the communities affected by the project, though the importance of the bridge gives all sides an incentive to see it constructed well.

Construction has also had to deal with social and cultural issues that have at times thrown the future of the project into question. The Niger Bridge’s importance makes it a frequent site for protests. Some of these protests have turned violent, including the recent protest by the youths on EndSARS, while tyres were burnt, they barricaded the bridge singing and dancing to the rhythms of their requests from the government.

The site’s location at the intersection of several key populations makes it a politically charged area, which at times threatens to erode foreign investors’ confidence in the long-term security of the bridge. There is also additional concern that poor relations with the communities located by the site of the second Niger Bridge could lead to delays.

The issues of land rights, environmental impact, and concern over economic benefits have already flared up at times, and it will be essential for foreign investors to form strong communication ties with these nearby communities to minimize delays.

Notwithstanding, the effect of corona virus disease which made all government to shutdown social economic active equally hampered the progress of the second Niger bridge. For month’s people including the construction workers stayed at home praying for the safety of the human race, all these had slowed the pace of work.

WAY FORWARD
Much as we share in the euphoria of Buhari’s promise, we are nonetheless becoming increasingly annoyed by what is clearly now stand as an endless shifting of the goal post with regards to the completion of this project.

Business tycoon, high Chief Okonkwo in his words said “we urge an end to this project so that its intended benefits would not be lost on the people who it is meant to serve. Like the Second Coming of Jesus Christ, people of the South East Nigeria and their friends look forward to the completion of this project with unreserved hope”.

“Government should prioritize the completion of this project for many reasons. Besides the many jobs it is already creating and will continue to create, a second bridge across the Niger is all that the government should do to end the gridlock that makes travelling to the east, especially during Yuletide, a nightmare.

Also, Mr Okunnia Emmanuel added “viewed from socio-political prism, this is the only meaningful project being undertaken by the federal government in the whole of South East. The few other ones, mainly roads, are either moving at snail pace, or have been abandoned completely for “lack of funding”.

The Buhari administration has, in recent time, woken up to the realisation that rail system is the way to go in transportation, especially at a time when roads infrastructure in the country has more or less collapsed. A good measure of investment has been made in this direction, but the South East Region is not anywhere in the scheme of things.

Nonetheless, there is urgent need by the Buhari government to rethink the 2023 new delivery date for the project. That new date seems to us as a date that will never be, considering the social Economic casualties caused by the corona virus and also it is the terminal year for the Buhari administration and this country is not known for project continuity by successive governments.

Again, 2023 is an election year and it nowhere in the history of Nigeria that an outgoing government would be concerned with projects and not how to win election. We are not known, in this part of the world to separate governance from election.

For these reasons and more, government should put sentiments aside and get this project done much earlier than the promised date, if eventually it will come to an end.

ASUU: Why we won’t call off strike – Lecturers