The significance of Ofo na Ogu in Igbo culture 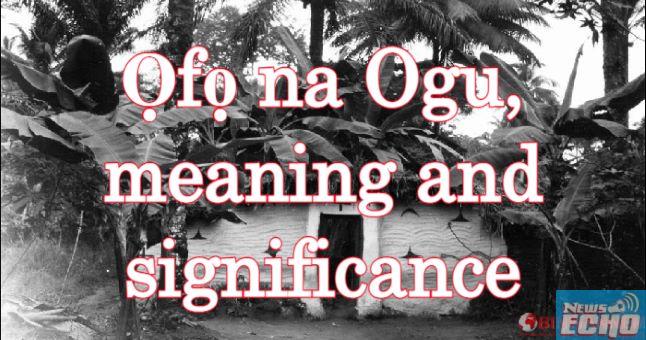 0
SHARES
103
VIEWS
Share on FacebookShare on TwitterShare on Linkedin

Toda, lawyers, educators, Igbo scholars in different disciplines and many other scholars even in the fields of political science write, speak and discuss a lot of Equity and Justice. Actually in Igbo mythology, this simply means Equity and Justice. It is indeed unfortunate that those we see as scholars of Igbo culture and tradition tend to forget this important aspect of our cultural life, which is very prominent in legal system. This needs to be understood further in this discussion.

What is Ofo na Ogu? It simply means Equity and Justice. Today, we have seen almost disappearance of many cultural practices and the depreciation of those significant practices which have helped the Igbo nation organize itself in almost every aspect of Igbo life. Before now, the society was highly organised and systematically administered. Then, common misbehaviors were very absence in Igbo man’s life.

There was nothing like armed robbery, stealing and confiscation of people’s land and indeed the practice of common crimes were not part of Igbo man’s way of life. Then in towns and communities, there was the practice of law and order. For example, farmers cultivate and left their farm produce in the farm until the next farming season, except those for immediate consumption.

Then and only then, people cultivated the habit of not stealing things that do not belong to them. In order to curb these misbehaviors, there was the practice of the administration of justice where suspects were brought to a local gathering, judged, convicted or freed of such offences. Those found guilty could be given different punishments such as: made to run around the market naked while marketers hooted at him sometimes spat at and threw rubbish and sands at such a person.

At the end of such execution of such punishment, the culprits were sometimes given a number of months or years to be of good behavior. On more serious offence, culprits could be banished from the community into distant communities with sever wanting not to return to his original community.

Sometimes, suspects were asked to take a community oath on dreadful deities and given one year to die or be free depending on the offence and punishment. Therefore Ofo na Ogu means the process of adjudicating justice.

As already specified, Ofo na Ogu is a process of adjudication of justice in traditional fashion. In this wise Ofo na Ogu is process through which an accused could exonerate himself or herself accused of any offence in the community setting.

Unfortunately, today, if one has a misunderstanding with another citizen, one could be asked to swear with the name of those powerful deities such as Amadioha (goddess of thunder) which is then, believed to be very effective in administering instant justice.

Over and over, an accused could be sentenced to beating of Ofor on him, believing that if he is guilty, something harsh would happen to him before a long time, such as falling from a tree, bitten by a snake or dies through an accident such as drowning in a river, falling from a tree etc. In this instance, it would be concluded that he was guilty of the accusation.

Unfortunately and painfully too, but to others fortunate by the advent of Christianity, most of these local practices which were not fetish or connected to idolatry worship gradually disappeared. In this case, without doubt, Christianity went too far in making our people abandon those practices which helped to check excesses, criminals and miscreants in the society have disappeared on the alter of Christianity.

Of course, today, in the adjudication of legal justice, offenders or the accused will be asked to take an oath. This means that both legal and traditional justice recognized oath tasking as part of justice. After all, on regular basis people still swear in different fashions to exonerate themselves from regular or minor accusations either interpersonally or in order gatherings.
Who says that Ofo na Ogu is not a natural way of pursuing Equity and Justice.