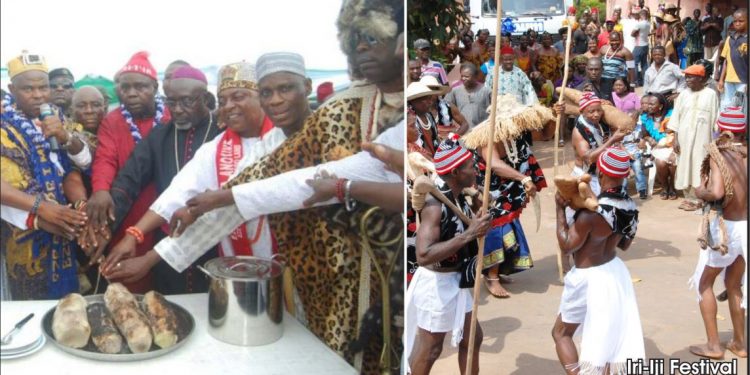 It was the late legendary Chinua Achebe who in his highly celebrated literature, ‘Things fall apart’ declared that things have fallen apart and the centre can no longer hold. In truth, that statement made some decades past still fits in perfectly to describe the situation that is confronting us at present. It is long that since things fell apart but right now it has fallen into pieces and attempting to return to its original nature seems an uphill if not an impossible task.

And so, it has been for the Iri Ji (yam festival), one of the prominent traditional festival for which the Igbos are known. It could be said that the origin of new yam festival dates back to the existence of yam. There is no part of Igbo land that new yam is not celebrated. Recently, it has become the practice to celebrate it outside the shores of this country in places where yams are not even popularly grown.

Many are now raising questions as to the appropriateness of this practice. The question makes sense because the new yam ceremony is part of the culture of the Igbo people and is associated with some rituals. It would be recalled that it was in the bid to attend the new yam festival in faraway Germany that the former deputy senate president Ekweremadu was assaulted by the Independent People of Biafra (IPOB) boys who felt dissatisfied with the role of Igbo leaders undermining Igbo cause.

What is new yam festival by the way? Yam in Igbo land is viewed as the king of crops. Before it is cultivated in some areas people make supplications through some rituals to the gods for a bountiful harvest. This is the case with the people of Owerri-West who celebrates annually the ‘Igbatu Oba Ji’ ceremony. It is usually done at the beginning of the farming season. Igbatu Oba Ji is the official opening of the gate/entrance to the yam barn where the harvested yams are stored for safe keep till the next planting season.

New yam festival refers to the ceremony used to herald the coming of a new yam. During the ceremony rituals are performed in gratitude to the gods of the land for a bountiful harvest. In Igbo land Ahiajoku represents the god of farming and harvest. It is to him all the thanks giving go to in appreciation. In the time past a man’s wealth is measured by the quantity of his yams and the size of his yam barns.

Those who may have distinguished themselves in growing the king of crops are rewarded with such titles as Eze Ji, Ogbu Ji, Eke Ji, etc. Ji is yam in Igbo. The festival is a feast that attracts people from all over as it creates a joyful moment among the people who use the opportunity to bond with each other. Married daughters and children come with gifts to make merry. It is a time of peace and there are laws in certain places forbidding fight, quarrel and all manner of indiscipline. There are other observances during the period and the new yams brought from the farm are used to offer to the gods.

The above titles have gone into extinction as they are no longer conferred on anybody. Conferment can only arise when we have yam farmers who have distinguished themselves among others in growing the kingly crop. That speaks a lot about the state of farming in Igbo land where agriculture has been the main stay of the region. Igbos main occupation are farming, trading and crafts.

Today, the new yam ceremony has been bastardized and politicized and at best ridiculed. It has been de-robed of all the essential ingredients that gives it the sacredness. It only exists in name and not in reality. You may want to know why. Today most of the traditional rulers are not committed to culture. They are straddling between two culture, religion and tradition. Most of them their loyalty goes more to the church.

They hardly can observe the tradition strictly because they despise some practices which in their opinion are fetish according to their Christian faith. Besides, most of the traditional rulers we have these days are prominently those appointed and imposed on the people by the government. The people they are presiding over most often are not on the same page with them but have no choice than to accept who they have.

It is through them that the new yam festival has been so popularized this time around because when they plan to celebrate it, they turn it into a political carnival of political party big wigs who gather for their selfish political interest rather than in the spirit of the celebration. We have not forgotten in a hurry the politics that was played with Iri ji Mbaise in 2018 where the interest and decision of the people were torpedoed by Okorocha and his men in power.

Yams are still grown in certain areas of Abakaliki, Enugu, Anambra and Ohaji but do not enjoy the prominence and attention it deserves. It is clear that the agricultural programs of the government do not strongly support it except in Ebonyi that is reported to be exporting it. There is very good reason for us to return to the lands.

Many of our up-coming youths today no longer show interest in agriculture whereas the cultivation of yam holds great opportunities. The traditional rulers should demonstrate sincerity in taking our people back to the roots. Yam cultivation is part of it. When are we going to have the next Eze Ji in our communities?

Biafra: Orji Kalu under fire for boasting he can bring back Nnamdi Kanu from UK