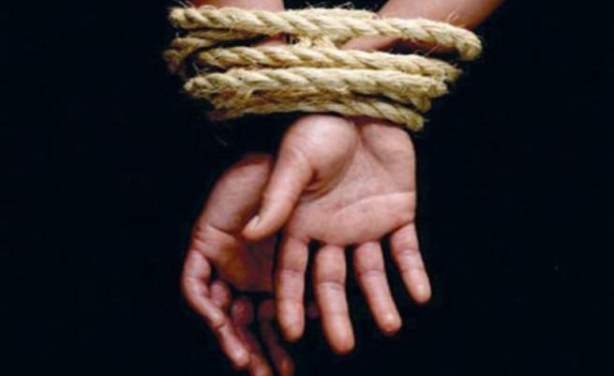 A middle-aged man accused of attempting to kidnap a boy, was beaten to death over the weekend by residents of Omuo Ekiti, headquarters of Ekiti East Local Government area of Ekiti State.

The incident occurred at Iludofin area of Omuo Ekiti, where the deceased attempted to kidnap a 7-year-old boy but was apprehended by angry youths.

An eyewitness revealed that the incident happened around 2.30pm when the pupils were returning from schools.

The source disclosed that a man, who sighted the deceased suspect, had raised an alarm as the suspect grabbed the boy and was forcefully dragging him into a surrounding bush.

The residents were said to have trooped out en masse and pounced on the suspect and beat him until he relapsed into coma.

“The suspect was trailing the boy from school. When he realised that he had reached a bush footpath, he pounced on him and started dragging him into the bush.

“It was a man who was looking from afar that raised an alarm and the people caught him in the act and beat him to stupor.

“It was later that the police arrived and took him to the station with the aim of taking him to the hospital for treatment,” the source said.

While confirming the incident, the Police Public Relations Officer, Ekiti Command, ASP Sunday Abutu, said the man died immediately he got to the police station.

Abutu said it was one of the Chiefs at Iludofin quarters that reported the case to the police.
“When we got the information, the police rushed to the scene of the incident but the man had already gone into coma.

“The mob action was very thick, but the police tried and rescued him and the intention was to first take him to the station for cover before rushing him to the hospital for medical attention. Unfortunately, he died in the station as a result of the beating,” he said.

Abutu said the suspect’s corpse had been deposited in the morgue at the Omuo Ekiti General Hospital, while investigation into the matter continues.

The police spokesman, however, cautioned against jungle justice, advising that any suspect arrested should be handed over to the police for investigation and prosecution.

Kanu slams ICC, UK, US, others over killings in Borno, Oyigbo