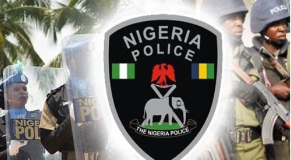 Police detectives in Enugu, yesterday engaged armed robbery suspects in a fierce gun battle, killing two of them in the process.
A statement signed by the state Police Public Relations Officer, Daniel Ndukwe, explained that the suspected armed robbers, were vandalizing street/traffic lights near Shoprite Shopping Mall, Enugu when the operatives raced to the location and successfully arrested three of the five-man armed, while two others were fatally wounded.

Ndukwe stated, “on arrival, the police operatives were engaged in a gun duel by the suspects operating in a yellow mini commercial bus, and in the process, two of them sustained bullet wounds and were later confirmed dead in the hospital while 28-year old Peter, resident at New Artisan, Enugu; Eze Chika, aged 20, resident at Ibagwa-Nike, Enugu and 25-year old Chika Ndu, resident at Ezeama-Nike, Enugu were arrested”

The police image maker said all the suspects had confessed to the crime, while some of their victims had been able to identify them and the items they robbed from them at gunpoint.

Items recovered from the gang, he said, included; one pump action gun with two live cartridges, a dagger, assorted phones, an LG TV set, electronic cables, car batteries and cash sum of N41,075, all suspected to be stolen.