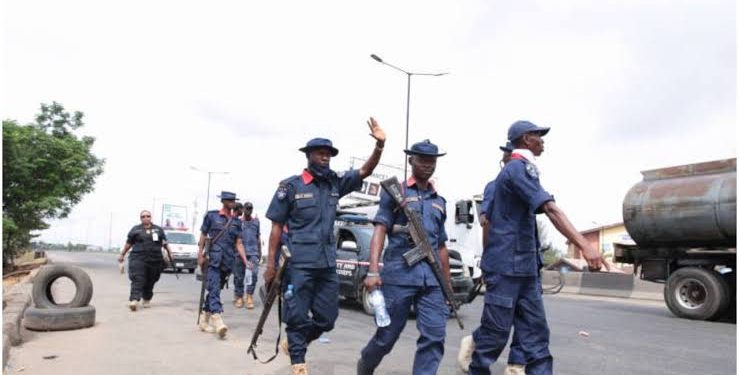 In a bid to curb the menace of vandalism and illegal dealings in petroleum products, the Nigeria Security and Civil Defence Corps (NSCDC), Anambra State Command has arrested three suspected illegal oil dealers.

State Commandant, NSCDC, Comdt. Vincent Ogu disclosed this to journalists at the command’s headquarter in Awka on Wednesday.

According to Ogu, the three suspects were arrested when they were conveying the products to their final destination at different locations. “On 26th/7/2021 at about 10:00hr through credible intelligence the anti vandalism team arrested one Sunday Nwaogu ‘m’ aged 37 of Imo Mgbidi Oru East L.G.A and intercepted a White Hiace bus with Reg number Ebonyi AKL 518 XP at Ihiala, Ihuala L.G.A filled with suspected automotive Gas Oil (Diesel) stacked in a concealed 67 cellphone bags”.

“On 5th of August, 2021 at about 07:30hrs, it arrested also one Tochukwu Okonkwo ‘m’ aged 37 of Eziokwelle in Idemili North LGA transporting suspected adulterated AGO loaded in 27bags stacked in Nissan Quest Bus with Reg no Lagos GT 538 EKY at immigration junction Agu Awka heading to Ugwuoba Oji River LGA of Enugu state”.

However, NSCDC boss has assured that the command will ensure that criminally minded individuals will not see the state as safe heavens to operate while urging the public to support the command with credible intelligence information for proper execution of constitutional duties and responsibilities.

News Echo at one

News Echo at one