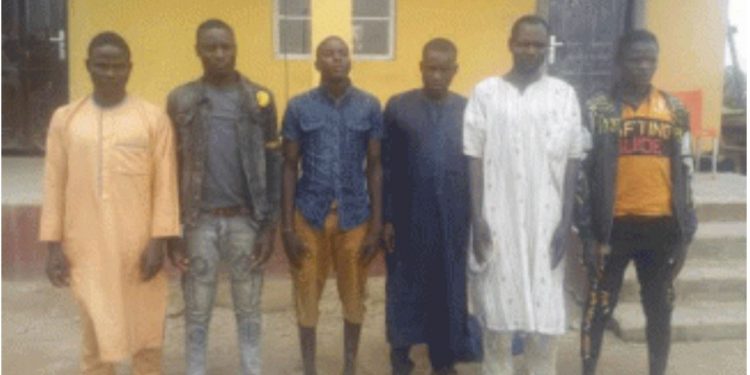 The six suspected bandits paraded by the military in Katsina

The Nigerian Army has said that its troops of Operation SAHEL SANITY have arrested six suspected bandits at Dan Aji Forest in Yar Mallamai village of Kankara Local Government Area of Katsina State.

The operatives of the anti-banditry operation also killed one notorious bandit at Dayau village in Kaura Namoda Local Government Area of Zamfara State, after a serious gun duel with the marauders who invaded the village.

The acting director, defence media operations, Brig. General Benard Onyeuko, who stated this in a statement Sunday at the Special Army Super Camp IV Faskari, Katsina, said the miscreants were nabbed after an ambush by the troops.

He said: “Following a reliable information about movement of unknown persons suspected to be bandits with six motorcycles at Dan Aji forest around Yar Mallamai in Kankara LGA Katsina State, troops immediately mobilized and laid ambush in the area and arrested the six suspects.”

The suspects — Haruna Hassan and Kabiru Abdullahi — according to Onyeuko, are members of a bandit group launching mayhem on communities in Faskari and other neighbouring local government areas of the state.
He however said the troops of Operation SAHEL SANITY deployed in Dan Ali village, acting on credible intelligence, arrested nine suspected bandits and collaborators at Sabon Garin Dan Ali in Danmusa Local Government Area of the state.

He explained that on September 19, 2020, troops deployed in Dandume, while acting on credible information, thwarted what he said could have been a massive attack on locals by bandits in the area.

He said: “The troops who received timely information on the movement of the suspects with several motorcycles swiftly mobilized to the area and engaged the marauding criminals in a fire fight. The superior firepower of troops forced the suspects to withdraw in disarray with several of the bandits sustaining gunshot wounds as traces of blood were seen on their escape route during exploitation.”