Many Killed as Gunmen attack Police checkpoint in Anambra 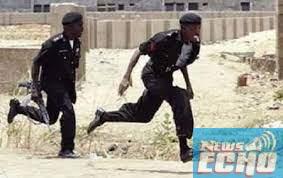 There is tension after gunmen attacked a police checkpoint in Anambra State. Reports gathered suggested some are feared dead during the attack with others reportedly injured.
The incident occurred around 10:30 am between Ihiala-Uli axis in Ihiala local government area.
The incident forced commuters to run for their lives as the gunmen shot non-stop.

According to reports, all the security operatives removed their uniforms and took cover in nearby bushes and houses.
Commercial bus operators have abandoned the Onitsha- Owerri expressway as of the time of filing this report for fear of being killed. Anambra Police spokesman Ikenga Tochukwu refused to pick calls for confirmation when contacted.

But one of the senior police officers, who spoke in confidence, confirmed the attack. The source said:” I’ve not heard of any death but I can tell you there were casualties during the gun battle.” The source added Police Commissioner Echeng Echeng has despatched special squad to Ihiala to quell the situation.