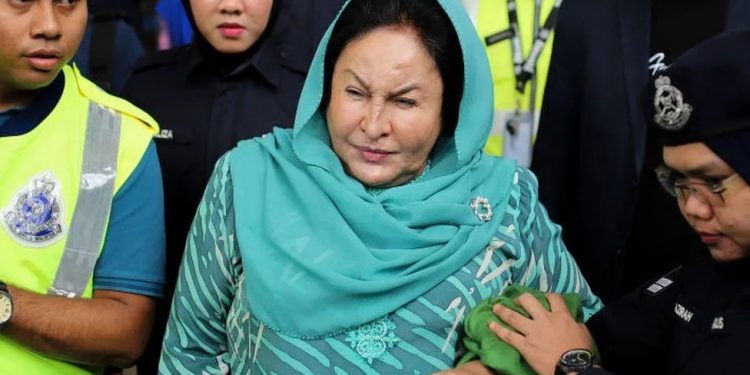 A Malaysian court on Thursday sentenced Rosmah Mansor, the wife of former Prime Minister Najib Razak, to a decade in prison for seeking and receiving bribes in exchange for government contracts, just days after her husband was jailed for corruption.

Rosmah will also have to pay a fine of 970 million ringgit ($216.45 million) over three bribery charges, Kuala Lumpur High Court Judge Mohamed Zaini Mazlan said, adding that the prosecution proved their case beyond a reasonable doubt.

The judge granted her a stay of sentence, so Rosmah will not go to jail on Thursday. She can appeal the decision in two higher courts.
Rosmah, dressed in a yellow baju kurung – a traditional Malaysian long blouse and skirt – and matching headscarf, addressed the judge tearfully immediately after the verdict.

“I must admit that I’m very sad with what happened today,” she said. “Nobody saw me taking the money, nobody saw me counting the money…. but if that’s the conclusion, I leave it to God.”

Her lawyers had asked for a one-day jail sentence, while prosecutors sought “maximum or near maximum.”
The former first lady, seen as a powerful figure behind Najib, has been widely scorned in Malaysia for her extravagant lifestyle and penchant for Hermes Birkin bags.

Rosmah, 70, had pleaded not guilty to the three charges of soliciting and receiving bribes between 2016 and 2017 to help a company secure a $279 million solar power supply project from Najib’s government.
Prosecutors say Rosmah sought a bribe of 187.5 million ringgit ($41.80 million) and received 6.5 million ringgit from an official of the company that won the project.

Rosmah has argued that she was framed by her former aide as well as several government and company officials involved in the project.
Rosmah also faces 17 charges of money laundering and tax evasion in a separate case.
Najib and his wife, who has faced criticism for her lavish lifestyle, are at the center of a wide-ranging crackdown on corruption mounted after defeat in a historic 2018 election ended Najib’s nine years in power.
Last week, Najib began serving a 12-year jail sentence after Malaysia’s top court upheld his conviction in a case linked to a multibillion-dollar graft scandal at state fund 1Malaysia Development Berhad (1MDB). He remains on trial in four other corruption cases.

Najib was voted out of power amid public outrage over the 1MDB scandal, which is the subject of corruption and money laundering investigations in at least six countries.
The U.S. Department of Justice alleges that $4.5 billion were stolen from 1MDB, about $1 billion of which made its way into Najib’s personal bank accounts.

Some of the funds stolen from 1MDB were used to buy jewelry for Rosmah, including a $27 million pink diamond necklace, U.S. lawsuits say.

Police found 12,000 individual items of jewelry, 567 luxury handbags, 423 watches, and $26 million in cash at properties linked to the couple following Najib’s unexpected defeat in the 2018 election.