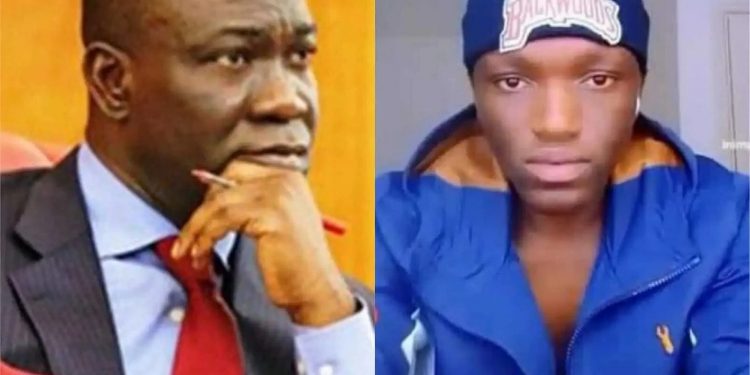 David Ukpo, an alleged kidney donor, has asked a federal high court to set aside a ruling which ordered the release of his bio-data to the attorney-general of the federation (AGF) for transmission to the United Kingdom.
Inyang Ekwo, the presiding judge, had in July ordered the National Identity Management Commission (NIMC), Nigeria Immigration Service (NIS), Stanbic IBTC and United Bank for Africa to supply information on Ukpo to Ike Ekweremadu, former deputy senate president.

In an application filed through his team of lawyers led by Bamidele Igbinedion, Ukpo accused Ekweremadu and his wife, Beatrice, of violating his fundamental human rights.

He noted that the former deputy senate president ought to have joined him and the AGF as parties in the suit.
He said the court erred when it granted Ekweremadu’s application without taking arguments from him.
The applicant further averred that the reliefs granted by the court violated his basic and constitutional right to privacy, which is protected by Section 37 of the 1999 Constitution, as amended.

“The attorney-general of the federation was also not made a party to the suit to enable the interest of the Federal Government to be represented, seeing that the effect of the order was to be utilized in a foreign country, namely the United Kingdom,” the affidavits attached to the application read.
“The applicant became aware of the said ruling through social media reports on Facebook and the applicant was deeply aggrieved with the said order(s).”

According to Ukpo, the suit was conducted in breach of his fundamental rights to fair hearing and privacy.
He asserted that the AGF’s approval was not obtained for the transfer of his information to the Uxbridge Magistrate Court in the UK, accusing Ekweremadu and his wife of misleading the court.
“It is in the interest of justice to set aside the entire proceedings,” he said.

“Unless the matter is heard urgently, irreparable damage and serious mischief would have been done to the applicant as the 1st and 2nd applicants/respondents would have taken undue advantage to take the Applicant’s bio-data and other personal information to their own use in Uxbridge Magistrate Court in the UK.”
The judge has fixed September 13 to hear Ukpo’s application which has Stanbic IBTC Bank, United Bank for Africa Plc and the Nigeria Inter-Bank Settlement System Plc, as third, fourth and fifth respondents respectively.

In June, the London Metropolitan Police arrested and charged Ike Ekweremadu, former deputy senate president, and his wife to court for allegedly bringing a child (Ukpo) to the UK for organ harvesting.
Although the London police said Ukpo is 15, his passport and bank verification number (BVN) show he is 21.
The Westminster magistrate court has also ruled that Ukpo is not a minor.

Police Brutatlity, Abuse, and Hatred of Asylum Seekers and Refugees in Belgium