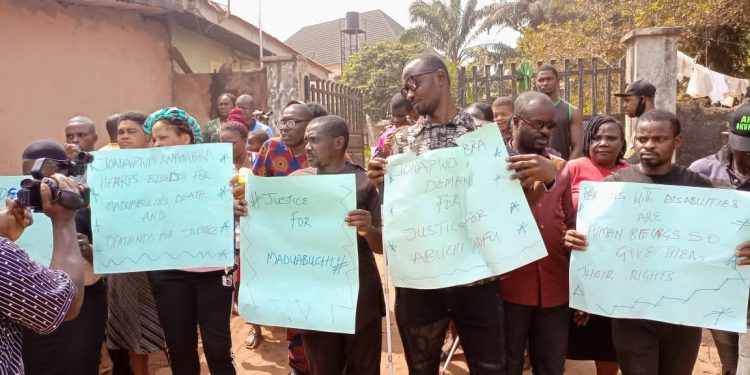 The Joint National Association of Persons with Disabilities (JONAPWD) Anambra State chapter has over the weekend, stormed Ekwulobia the country home of late Mr. Mmadụabuchi Nnofu, the blind man that was gruesomely murdered by his younger brother over a land issue barely a week ago.

Addressing the bittered and battered the members who gathered at Aguata Local Government Secratariat for an organized protest over the unfortunate death of Abuchi Nnofu, the Chairman of JONAPWD Anambra State chapter, Comrade Ugochukwu Ernest Okeke consoled his members and state that the main purpose of the protest was to visit the Nnofu family and get a first-hand information surrounding Abuchi’s sudden demise and pay a visit to the traditional ruler of Ekwulobia and know his stand over the ugly incident and charged his members to comport themselves in an orderly manner irrespective of their grievances.

Arriving the Nnofu compound in the company of newsmen, JONAPWD members met Abuchi’s aged mother who on seeing Abuchi’s colleagues wailed bitterly and pointed that it was Abuchi’s kindness and quest for unity in the family that took his life.

”My son Mmadụabuchi has endured alot from this youngest brother that killed Abuchi.

“Severally he has continued to insult, abuse and threaten Abuchi’s life because of this very piece of land.

“I have taken this matter to the town’s vigilante severally and even to Ekwulobia police station but the security people seem to be reluctant about the threats, now look at what it has resulted to.”

She also pointed accusing fingers on her late husband’s brother, one Mr. Emmanuel Nnofu and his first son, whom she said has been planning with her son to sell the piece of land. She also pleaded to the government of Anambra State to help intervene in the speedy release of her son’s corpse so that he can be given a befitting burial.

Showing JONAPWD members round the scene of murder, Mr. Amandi Nnofu who is a paternal cousin to Abuchi said the accused murdered his brother because Abuchi and his other two brothers kicked against the accused decision to sell his only landed inheritance given to him by their late father.