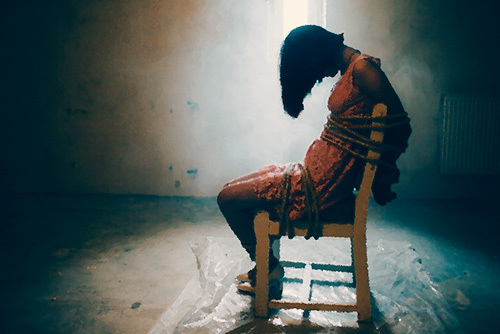 0
SHARES
240
VIEWS
Share on FacebookShare on TwitterShare on Linkedin

The Lagos State Judicial Panel of Enquiry and Restitution for Victims of SARS related abuses and other matters on Saturday heard the chilling details of how the now dissolved police unit allegedly tortured a pregnant teacher and her husband for 22 days, till she lost her baby.

Ogechukwu Obiechina and his wife Ndubuisi told the panel that the incident occurred in June 2017 after the operatives falsely labeled her a thief and kidnapper.

Mrs Obiechina , who spoke for the couple, said she was two months pregnant at the time, but that during beatings, the men threatened to “force the baby out of me”.

She claimed that following further trauma from the torture SARS operatives meted out to her and her husband during his second arrest in October 2017, she lost another pregnancy.

She said men of the Federal Special Anti-Robbery Squad (SARS) also stole her husband’s N50,000 and compelled them to cough up N400,000 as bail before they were freed.

She told the panel that the couple in 2017 sued the Police at the Federal High Court in Lagos and won.
Justice Mohammed Idris ordered the Police to pay them N2 million as compensation.
They also won at the Court of Appeal in Lagos in 2020 but the Police refused to comply with the judgment.
Mrs Obiechina identified some of her alleged torturers as “Phillip Rilwan, Christian and Haruna Idowu”, all policemen.
Panel chair, Judge emeritus Doris Okuwobi, adjourned sitting till November 10 to give the mentioned operatives an opportunity to appear and respond to the allegations.

The Obiechinas’ testimony was the first of four petitions for the third day of sitting since the Lagos State Government set up the nine-member panel on October 15, following weeks of near nationwide #EndSARS protests.
The other petitioners are Olusegun Openiyi; Francis Idum (deceased) and Olajide Fowotade. The fourth petition didn’t go on.
Mrs Obiechina, a private school teacher, said on June 1, she received a text message from an unknown number that she had a parcel from DHL.

A caller using different numbers asked for her home or office address and she gave him her school address upon her husband’s advice.
It was the next day, June 2, 2017, that her ordeal began.
She said the men arrived at her school in a black Sports Utility Vehicle (SUV).

Her words: “I saw a black jeep with huge men inside it. One of them was in a DHL uniform…
“Immediately, they approached me, they started beating me. They said I should enter inside. They said I was a thief, an armed robber.

The one in the DHL uniform removed it. My HM (Headmistress) was peeping at us. I said let me go and tell her. They said no.”
The petitioner said she had a five-year-old son at the school, but they didn’t care.

“I said my kid is there, they said no, that I should follow them, that my kid would die there. My HM came to the gate; they pointed a gun at me. She asked what was going on. They said ‘This woman is a thief, a kidnapper. She must follow us and go. They said they were Police, SARS.

“They pushed me inside the car and moved. The men were slapping, beating me. I was two months pregnant. I started vomiting. That’s when they found out I was pregnant. But they kept torturing me. I told them I did not know the suspect.
“They took me to their office at Ikeja. They took me to a shrine. They hanged me, beat me. They said they would force my baby out of me. They said I must produce the person or die there,” Mrs Obiechina said.

I was once an urchin –