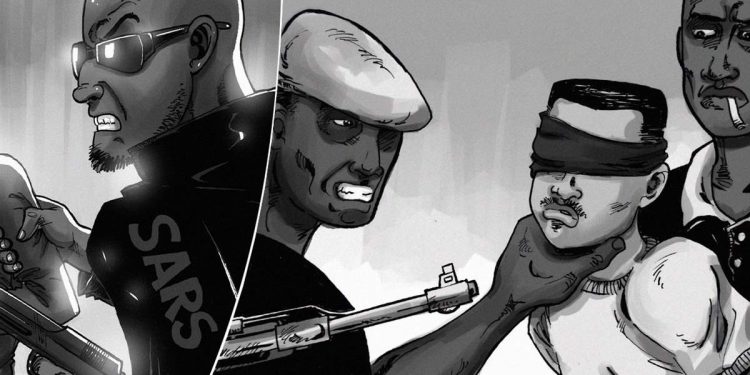 0
SHARES
77
VIEWS
Share on FacebookShare on TwitterShare on Linkedin

As the Judicial Commission of Inquiry into Police brutality and related extra judicial killings holding in Owerri began hearing for the second week, a dredger and miner operator, Miracle Duruawuzie, a native of Umuaka, Njaba local government area, Imo State, has told the panel that his brother, Osita Duruawuzie, was allegedly shot dead by a policeman, Kelechi Chikwe, who was posted to the bank at Orlu, over ATM withdrawal, on 1st December, 2019.

Duruawuzie Miracle, having adopted the petition as his case before the commission, narrated that he, Osita Duruawuzie (late) and Daniel Duruawuzie, went to the bank to withdraw money from the ATM.

As they queued, trouble ensued between Osita Duruawuzie and someone on the queue who reported the argument to the bank security who now called the Policeman (Kelechi Chikwe) to settle the brouhaha.

According to the petitioner, “the policeman without asking any question to ascertain who was at fault, tried to drag my brother to the police station close to the bank, but he refused and insisted that the person he was having commotion with came along with them to the police station. I came out of the queue and separated Osita Duruawuzie from the policeman. He immediately corked his gun and shot him in the leg. When he tried to run, he shot him again on the waist.

“When I made to help my brother who was bleeding profusely on the ground, the policeman threatened to shoot me. I fell on the ground inside the bank and he hit his leg on my head badly. The CCTV was live”.
The Commission having heard his testimony by the help of his lawyer, instructed the counsels to the commission to notify the accused policeman, the bank management to appear before the panel on 16th November, 2020, for witness and defense.

handcuffed him and took him away on the allegation that he bought a stolen Highlander vehicle of which fake receipt was produced with the dubious intent to get money from him, took away his personal deity (Agwu-ishi) from his box, took some belongings of his wife who was not at home when the policemen stormed his house which were not returned to him.

Nweke, who also adopted the petition as his case before the commission, maintained that despite being dehumanized by the indicted seven policemen, was bitter that he spent huge sum to bail himself from Zone Nine Police Headquarters, Umuahia, Abia State.

Nweke further told the panel that he “took the policemen to Federal High Court, Owerri and won his case there”, stating that he was yet to receive ten million naira compensation from each of them as the court decided.

The Commission adjourned his case to 16th November 2020 in order to give room to the indicted policemen to appear for defense before it. The petitioner was guided by his lawyer, Jamike Nwosu, who told the commission that his client (Nweke) needs justice having suffered a lot of ordeal in the hands of the indicted policemen.

However, over nine petitions were received by the commission on Monday, 9th November, 2020, two were heard, and other petitioners were not present at the court while others were called out for the first time.

The panel which was presided over by chairman of the commission, Hon Justice Felicia Duruoha (retired), was adjourned to 16th and 17th November, 2020, to enable the petitioners and the accused policemen and others to appear before the panel.

Counsels to the commission led by Chief H.N Duruoha was asked to adequately send notice of summons to the parties involved to appear before the commission for defense and evidence.

In a related development, the commission has inspected Mbaitoli Divisional Police Headquarters, Nwaoriubi and Orji Police Station to ascertain level of damage by suspected EndSARS Protesters for recommendations to government for rebuilding and reformation of the police force.

Speaking to journalists after the inspection tour, Secretary of the commission, Isaac Oguzie, hinted that rebuilding the police buildings and offices was germane for effective security to enhance total development.

Just as other members of the commission, Commandant Agu Desmond, Barr Chima Anozie (home base) and Mr Paulson Nnamdi Iwuala added that “there is need to relocate the Orji police station to a safer and bigger place” to maintain peace and orderliness in the area.