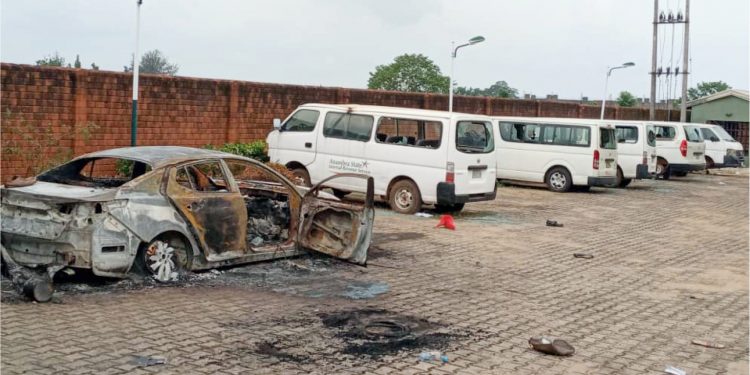 It was a gory sight Sunday October 25, 2020 in the capital city of Awka as #ENDSARS protesters besieged the Agu Awka axis, unleashing terror and mayhem on government-owned facilities, as well as private owned buildings situated in the area.
It could be recalled that various states within a space of one week had experienced unprecedented actions with a view that they are clamouring for change in government leadership.
States like Lagos state, Abuja, Kaduna, Plateau, Cross River, Ondo states, no mention a few were these hoodlums disguised protesters vandalised shops, raided warehouses, burnt properties and targeted the businesses of prominent politicians
News Echo Correspondent reports that as at Saturday morning, armed security operatives were sighted manning the office of State Emergency Management Agency (SEMA) Agu Awka to prevent the angry youths from gaining entrance into the building.
Yet angry protesters were seriously increasing in numbers until 12PM when they decided to invade the storage house. However, on approaching the SEMA office, they security operatives opened fire, shooting sporadically to disperse the already chanting youths.
Not long ago, some youths were heard shouting that a young man had been gunned down by the security men. His remains were said to be later whisked away by some unknown persons.
Another, victim who lost his life during the fracas was a middle-aged man simply identified as Ala Owerri on Saturday who was crushed to death while attempting to jump out of a moving trailer suspected to be carrying food items at the popular Aroma junction, Awka, Anambra state.
A witness who preferred anonymity said, the deceased was a mechanic and had abandoned his work when he sighted people rushing to the trailer conveying the noodles.
“The man had gone to the SEMA office Awka earlier to loot noodle cartons but sighted the trailer on the road and jumped on board only to find charcoal inside it.
“As soon as he jumped out, he was crushed to death by the trailer tyres. His stomach was torn open and his legs broke under the weight of the vehicle.
The witness who said the trailer was quickly set ablaze by the angry youths, wondered why they should ventilate their anger on the truck since it was not the fault of the driver.
“The driver of the trailer never knew that somebody jumped into his vehicle and was not aware when the man jumped out. The man killed himself and nobody should blame the driver for the death.
The irate youths however, descended on the building of the Internal Revenue Service otherwise known as the Revenue House situated at Immigration junction Agu Awka and set it ablaze.
While hoodlums were said to have taken advantage of the ENDSARS protest to attack the Revenue House, the State Emergency Management Agency complex and other facilities where they unrelentingly overwhelmed security formations and wreaked havoc in the facilities.
The disgruntled elements according to the Chairman of the Anambra State Internal Revenue Service Dr. David Nzekwu, overpowered security deposits at the premises and gained unhindered access into the Revenue House where they destroyed valuable properties and burnt both official and private vehicles parked in the compound.
Nzekwu who narrated the ordeal in a telephone interview, said the revenue complex was completely ransacked and reduced to rubbles by the miscreants, describing the attack as most unfortunate and unwarranted.
Seem not to have been fully satisfied, some of the hoodlums head straight to the office of the Anambra rice mill Ltd under the umbrella of Stine rice where they vandalised the whole building, carted away stored rice, laptops, furniture as well as looted the office of a lawyer situated in the same building.
Ben Osayi, one of the staff, speaking to News Echo while expressing disappointment said, the hoodlums took everything including files films stationery. It was like if they planned the robbery because they ransacked and looted everything including some undisclosed amount of money.
According to Barrister Emeka Oforbi, a legal practitioner in Awka, disclosed that the mob went too far though on the part of government especially the politicians, are the root sponsors. “This is an organized movement by some people, and hungry/greedy people have queued up to help them actualize their agenda. What is happening across the nation is beyond what the ordinary Nigeria youth can do. There is a higher force propelling these actions”.
He stated that for the government to address the situation of these miscreants who are poor citizens and have bottled up anger. And feel neglected by the system and feel this is the best way to show their grievances (even though it is not), they should be able to effect change.
Traditional ruler of Nnewi, Anambra State, HRH, Igwe Kenneth Orizu III having expressed worry over the burning and vandalization of police stations and other security formations in the area, warned those who burnt and carted away arms and other properties in the city to return the loots or face the consequences.
Orizu who spoke through the Crown Prince, Obi said the leaders in the area were carrying out intelligence gathering on how to fish out who and where the looters were to plead with them or otherwise for the recovery.
He explained that he was not against the protest as it was nation-wide to address a nagging issue that bordered on police brutality but could not understand why the property of the community would be destroyed in the name protest.
Revealing that all the police stations in the town were built by Nnewi people except the Area Command, the monarch said it would be folly for one to build something and destroy it only to build it again.
He regretted that the situation ha rendered so many parts of the country porous security wise, pleading with the protesters to suspend the protest and take a leaf from Lagos State which he said had reportedly ceased fire to watch how government would address the issues raised.