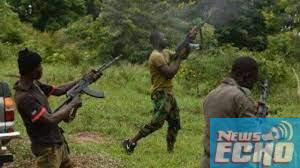 The President-general of Ahuwa Oboro ancient kingdom in Ikwuano LGA of Abia State, Engr James Uchegbuo has described as shameful, the recent attacks on Nigeria Army’s base in Kaduna and Abuja-Kaduna train by terrorists. The attacks, according to Engr Uchegbuo, showed that the federal government is running out of ideas on how to end the menace of terrorists’ operations in Nigeria.

Uchegbuo stated this in Umuahia while reacting to the disturbing incidents, lamenting that more innocent souls are being wasted on daily basis by the activities of terrorists on Nigeria’s roads and forests. The Ahuwa Oboro leader wondered how armed bandits would operate freely in Kaduna State, despite the siting of several military formations in it. He further expressed surprise how bandits overran Nigeria Army base in Pole Wire, Birnin Gwari, Kaduna State and killed 17 soldiers, 3 civilians and leaving others fatally wounded.

“It is dangerous and unfortunate that our people are no longer safe whether in their homes and even in their farms. Our roads are becoming death trap, passenger trains are now being attacked and passengers are kidnapped, maimed and murdered by these terrorists.” He reminded President Mohamadu Buhari of his responsibility of securing the lives and property of Nigerians, in line with the constitution he swore to uphold.

He asked all military chiefs to justify their appointments by restoring security in Nigeria even as he advised President Buhari to tackle activities of armed herdsmen in different States of the federation. On the sacking of Sheik Nuru Kalid, the Chief Imam of Apo Quarters Mosque Abuja, by Mosques committee, Uchegbuo called for immediate recall of the Islamic priest.

He queried the rationale behind the action of the committee that removed Khalid who he said, delivered a truthful sermon, who also spoke truth to authority. “In a progressive society, people like Sheik Khalid are celebrated. Is it not shameful that a man who spoke the truth is being harassed? Does he not deserve commendation?” Uchegbuo called for freedom of speech and religious tolerance.