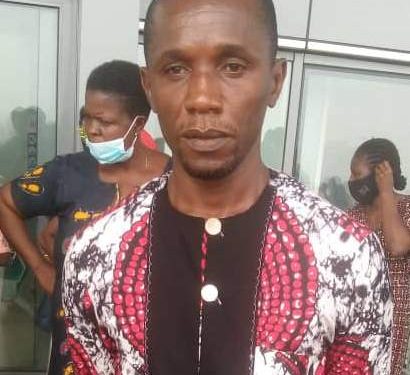 Mmaduabuchi, a visually impaired and the first male child of his family was allegedly murdered and burnt beyond recognition by his younger brother, Onyedika over land dispute, News Echo reports.

The incident which happened on Sunday at Eziagulu village, Ekwulobia in Aguata Local Government Area, had the entire community thrown into agony.
Our correspondent learnt that the prime suspect, Onyedika has been in conflict for long with Mmaduabuchi his brother, over a piece of land, and has on several occasions, threatened to eliminate the victim.

The source stated that it was at about twelve noon on Sunday that he heard a loud shout in Nnofu’s compound, and when people gathered to know exactly what happened, it was discovered that the victim was hacked and burnt beyond recognition by the said younger brother, Onyedika.

He explained that the irate youths of the community attempted to lynch the suspect before the intervention of the Police who rescued him, saying that he is now in police custody.

In an interview at the scene, the Special Adviser to Governor Willie Obiano on Disability Matters, Mr. Chuks Ezewuzie, described the incident as unfortunate, stating that the victim was a vibrant leader in disability community, and a visually impaired who can never hurt a soul.

Mr, Ezewuzie a lawyer who is also the Chief Executive Officer of the Anambra Disability Rights Commission, assured that the office will assist the family, praying that justice would prevail.

On his part, the Coordinator of Joint National Association of Persons with Disability, in Anambra State, Comrade Ugochukwu Okeke, condemned the heinous act and called on security agencies and other relevant authorities to wade into the matter.