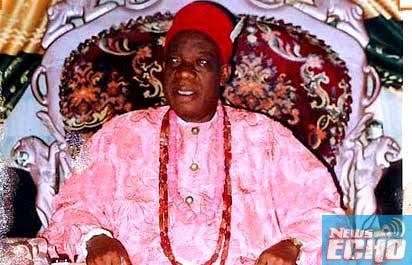 There is palpable tension in Agwa community of Oguta Local government Area of Imo State as the residents have taken to the bush for refuge over the unprecedented attack that took the life of the ancient traditional ruler, His Royal Highness Eze I.O Asor, Udi 1 of Obudi Agwa and two of his cabinet members.

Stemming on the above, President Muhammadu Buhari has condemned the heinous killing of Eze Ignitus Asor, the traditional ruler of the Obudi-Agwa community in Oguta Local Government Area of Imo State.

Recall that gunmen on Monday, struck and killed the traditional ruler of Obudi Agwa Autonomous Community, Eze Ignatius Asor. The suspects were said to have come in four vehicles and two motorcycles that also had a female accomplice that completed the task with them.

It learnt that the unknown killers also snuffed life out of two other persons in the community.
The gunmen stormed the palace while a meeting was going on and opened fire, killing the monarch and others at the spot, while injuring some others.

The attack was said to have left the community devastated, as some have fled the community for fear of more attacks and massive arrests.

“Gunmen stormed the palace while they were having a meeting and opened fire on them. The traditional ruler, Eze Ignatius Asor has been killed and two others.

“Some people were also injured. The community is devastated; many have run away out of fear.
The state Police Public Relations Officer, CSP Michael Abattam, was yet to react to the incident as at press time.
A day after the attack, the President issued a statement via his media aide, Garba Shehu. He directed security agencies in the state to investigate the dastardly act and ensure that the perpetrators face the full wrath of the law.

Commiserating with family, friends, the Obudi-Agwa community, as well as all those affected by the attacks, the President prayed for the speedy recovery of those injured.

He also acknowledged the spirited efforts by the Imo State Government at improving the security situation and encourages all Imo residents and citizens to robustly support the collective efforts of state actors and members of the local community to keep everyone safe.

Meanwhile, Police spokesman, Michael Abattam, had said the attackers disguised themselves as people in distress and approached the royal father for help.

He said the Commissioner of Police, Mohammed Ahmed Barde, has condemned the attack, asking the people of the Agwa community to be calm.

Abattam “assured the good people of Agwa in particular and Imo State in general, that investigation has commenced, and the Command will leave no stone unturned until the perpetrators are arrested and made to face the full wrath of the law.”