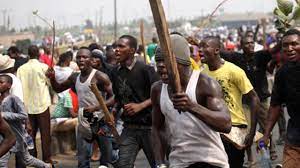 Palpable tension and fear has gripped residents of Awka metropolis following the dastardly murder of two suspected cult members and two persons arrested in connection of the crime.
News Echo authoritatively gathered that the two killings took place at different strategic places such as the Eke Awka roundabout market and Ifite Awka road where two unidentified young men were murdered in cold blood.

It was also revealed that the death of the two young men was as a result of cult clash although our source who pleaded anonymity could not ascertain which cult group had the encounter.
Confirming the report, police public relations officer, DSP Ikenga Tochukwu of Anambra State Police Command in a press statement said;
“Police Operatives have arrested two (2) persons suspected to have been involved in clashes between rival cult groups in the early hours of 28th March, 2021, along Ifite Awka, Zik’s Avenue in Awka South LGA, which led to the death of two yet unidentified young men, whose bodies have been deposited in the mortuary for preservation and autopsy”.

Meanwhile, adequate security have been taken to forestall further escalation of the incidence, while full-scale investigation to determine the culpability or otherwise of the two (2) arrested persons as well as arrest fleeing members of the cult groups, has commenced.
However, discreet investigation is ongoing to arrest and bring to book other members of the criminal gang on the run.
All the suspects would be charged to court on conclusion of investigations.

The Commissioner of Police, CP Monday Bala Kuryas while reiterating the commitment of the Command not to spare unrepentant criminal elements in the State, has enjoined Anambra citizens not to hesitate in providing useful and timely information that can assist the Police in its operations.