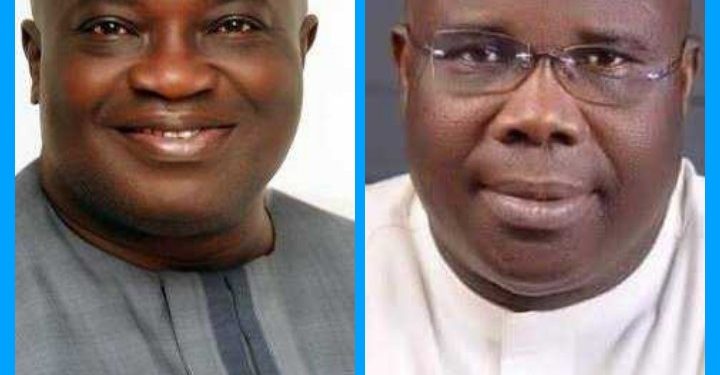 Omerekpe also alleged that Ikpeazu’s administration also stopped his foreign partners from investing a wooping $2 billion (two billion dollars) into Abia agricultural industry because the government wanted to take a brine of $200 million which is 10% of the investment.
He warned the Ndoki communities that the alleged person whom the media has been reporting that the Governor is supporting to replace him is all deceit, stressing that the Governor had secretly anointed a certain construction Engineer from Osisioma Ngwa Local Government Area who is already preparing to take over.
Omerekpe who was brandishing what he termed as documented evidences of his claims in the video that went viral asked anyone in doubt to ask Governor Ikpeazu why he has done nothing about an alleged N6.1 billion paid to the said construction Engineer on road construction which he has not put into any use.
He said, “There’s a man in Osisioma I don’t want to mention his name, but the Governor is sponsoring him. If he is not sponsoring him, ask him why in the last six months, he has been paid N6.1 billion to construct roads in Abia where are the roads?
“You must open your eyes. The man they’re fronting is just the mirror. The real game a the man he’s giving his money in construction. Now, I have documented evidences of what I’m saying.

“Abia State Governor and government ran to me when when they found it difficult to help them secure a loan from the African Development Bank which I did and secured a loans of $300 million last year. Where’s the money and where is the road?
“African Development Bank and Dutch Africa, they’re my partner. We came to Abia State last year to invest $2 billion dollars in Agriculture. The whitemen that came with me stayed at Ndoki and we came to take soil samples including that of the blue river.
“This blue river you see here is the very best in Africa. This river was to turn Ndoki to Dubai, but this same people that are fronting someone as the Governor demanded 10% of that money which is $200 million. The whitemen got angry and left. This is the document.

“You can go through it and see even the ones the Governor signed by himself. We were to provide 150,000 jobs for Abia youths in the first one year and 150,000 jobs for the youths in the second year. Ukwa was to give 50, 000 youths but they killed it last year.”
The Chief Press Secretary to Governor Okezie Ikpeazu in swift reaction described Omerekpe’s statements as very ridiculous, irresponsible and extremely outlandish assertions against the person of Governor Okezie Ikpeazu and his administration.

Ememanka said that electioneering periods are synonymous with all manner of idle talks and that Mr Omerekpe has clearly set a new record in the manufacture of a special brand of “tales by moonlight” clearly inspired by electoral confusion.
Ikpeazu’s CPS said that Omerekpe’s claims that he secured a loan of &300 Million from the AFDB for the State, after the Governor ran to him for help is the most nonsensical statement anyone can make.

He said that any person who understands the workings of an International Financing Development Partner like the AFDB will find Omerekpe’s claims laughable and a joke taken too far.
Ememanka said that the Abia State Government has not accessed any loan of $300 Million or any amount whatsoever from the AFDB. Mr Omerekpe also claimed in the same video that he facilitated another investment from the same African Development Bank in the area of Agriculture to the tune of about 2 Billion Dollars for the State Government but that the investment was frustrated because some officials of the State Government demanded a bribe of 200 Million Dollars from the investor. He said that Omerekpe’s claims that Abia government wanted bribe of $200 Million which he said is about 75% of the current budget of the state shows that he might be under some sort of influence when he made the comment.

“Let it made clear that Governor Okezie Ikpeazu will pursue this issue before a Court of Law and put Mr Omerekpe to the strictest proof of his wild claims. “Omerekpe cannot malign the integrity of the Governor of Abia State, tell wicked lies against him of such magnitude and walk away freely. Omerekpe will definitely hear from the Governor’s lawyers very soon. “If this is how Omerekpe thinks is best to pursue his gubernatorial dreams, then it is clear that he was never serious from the first day. Delegates of the PDP will expect him to explain to them what he seeks to achieve by making such malicious and false assertions against the Governor of Abia State.”
News Echo reports that barely few hours after Sir Onyebuchi Ememanka replied the accusation Omerekpe made against his boss, the aspirant flooded the social media with documents he said are evidences of what he was talking about.

Elder Nnamdi Okogbuo, Director General, Ncheta Omerekpe Campaign Organisation who uploaded the documents said that it is unfortunate that Ikpeazu’s CPS is not even aware of what his Boss is doing. “One would have expected Ememanka to have audience with the Governor as to know the facts of the matter and avoid his deceitful grammatical semantics. Our happiness is that, Abians cannot be deceived again in the name of politics. “For the avoidance of doubt, Chief Ncheta Elvis Omerekpe came into the picture of African Development Bank Loan ( AFDB), when it was alleged that Dr. Alex Otti blocked access to the loan. “Hence, his company was consulted for intervention as a consultant, Pro Bono and he defended the loan before the Senate Committee on Local and Foreign loans, headed by Distinguished Senator, Shehu Sani during the 8th Senate.”The following people are alive and accompanied Chief Omerekpe before the Senate Committee. They are: – Sen. T A Orji, Sen. Enyi Abaribe, Obinna Oriaku, Barr. Bob Ogu, Hon. Darlington Nwokocha, among others. “The question is; did Onyebuchi Ememanka sight the documents and did he ask questions before going public to disgrace his office? Does it not tell Abians there is a disconnect from the government he is serving? Any further insult on Chief Omerekpe, we may be forced to release more documents.”

Parents have you held a hoe before?