CBN Gov. Emefiele; trapped in the vault of a betrayed trust 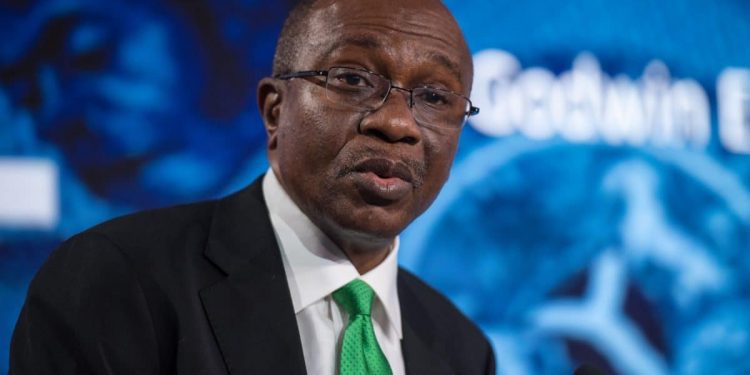 …Akeredolu, Ezekwesili urge him to resign and pursue his “ill-fated political career”.
…His continued stay in office jeopardises 2023 election materials – SAN
… involvement in politics illegal, will compromise CBN autonomy – Falana
…as Court rejects his request to Stop INEC, AGF against his ambition

Nigeria’s former Minister of Education, Oby Ezekwesili, has alleged that the Central Bank of Nigeria Governor, Godwin Emefiele, handed over the apex bank’s control to the President, Major General Muhammadu Buhari (rtd.) since the latter assumed office.
She also alleged that the “ill-advised monetary policies” of the bank in the last seven years were “political”.

Ezekwesili’s allegations followed the reports that Emefiele picked the All Progressives Congress N100m presidential nomination and expression of interest form. He reportedly picked up the form on Friday in the Federal Capital Territory, Abuja.

The former minister in a series of tweets on her Twitter handle on Friday said the wrong monetary policies since Buhari assumed office in 2015 were testament that the bank had handed over its independence to the President.

She alleged that the hidden politics behind the wrong monetary policies and alleged control of the CBN by Buhari led to Emefiele’s open partisan politics.

Lawyers reacts…:
Aside from Ezekwesili, the Ondo State Governor, Rotimi Akeredolu, who is a lawyer, has also asked Emefiele to resign from his position immediately following his intent to engage in partisan politics and contest the 2023 presidential election.

Akeredolu, in a statement he personally signed on Friday, described the CBN governor’s move as “a joke taken too far”, and asked the President to fire Emefiele if he refused to voluntarily resign.

A Senior Advocate of Nigeria (SAN), Ebun-Olu Adegboruwa, has described the case instituted by the Governor of the Central Bank of Nigeria, Godwin Emefiele, over the 2023 presidential election as “comedy” and an “insult to Nigerians”.

He said, “By the decision of the Supreme Court in Akinlade vs INEC, there is no competent suit filed by Mr Emefiele pending before the court for adjudication.

“The affidavit in support of the Originating Summons and indeed the Affidavit of urgency were both deposed to by counsel on his behalf, in flagrant violation of Rule 20 of RPC.

“An Originating Summons cannot be determined in the Federal High Court without a competent affidavit in support thereof.

“By his status, Emefiele is an employee of the CBN. Any case to determine his status or eligibility should be filed at the National Industrial Court. So long as Emefiele earns a salary as a CBN employee, he should not dream of contesting elections while still holding on to his office. It is an insult to our collective psyche as a people.

“Sensitive election materials are always kept in CBN offices nationwide by INEC, unknown to Nigerians that Emefiele as Governor of CBN had been a politician all his life.

“The political party that owns the presidential ticket that Emefiele wants to grab is not a party in his court case, contrary to extant laws and practice.

“I urge the Nigerian Bar Association, Election Situation Room, SERAP and other civil society organizations to apply to the court to join Emefiele’s case and put an end to this joke.”

In the same vein, Rights activist and Senior Advocate of Nigeria, Femi Falana, has said that the involvement of the Governor of the Central Bank of Nigeria, Godwin Emefiele, in partisan politics is illegal, stating that it will compromise the autonomy of the apex bank.

Falana said this in a statement signed by him and published on the website of EiE Nigeria on Monday.

In the statement, which was titled, ‘Legal Hurdles to Cross by Mr. Godwin Emefiele,’ Falana said the performance of the statutory functions of the CBN which shall be in the national interest could not be left in the hands of a politically exposed person.

The statement partly read: “The supporters of the Governor have ignored section 9 of the Central Bank of Nigeria Act which provides that : ‘The Governor and the Deputy Governors shall devote the whole of their time to the service of the Bank and while holding office shall not engage in any full or part time employment or vocation whether remunerated or not except such personal or charitable causes as may be determined by the Board and which do not conflict with or detract from their full time duties.’ The provisions of section 18 (4) (b) of the Banks and are in pari materia with Section 9 of the CBN Act.

“For the avoidance of doubt, the powers conferred on the Governor and the Board of the CBN under the CBN Act are enormous.

In addition, the Banks and Financial institutions Act 2020 has empowered the Governor and CBN grant and revoke licences of banks; supervise banks, dissolve Boards and Management of Banks, remove Managing Directors and other directors of Banks, sanction erring banks and officials, make rules that guide commercial banks, provide loan to Governments, set interest rates, serve as apex bank to other banks and ensure cordial relationship with foreign banks.

Furthermore, the Minister of Finance shall seek inputs from the CBN in preparing the Medium Term Expenditure Framework for the annual budget pursuant to the provisions of the Fiscal Responsibility Act 2007.

“The performance of these statutory functions which shall be in the national interest cannot be left in the hands of a politically exposed person. Hence, the Central Bank Act and Banks and Financial institutions Act provide that the bank shall be a fully autonomous body with the objective of promoting stability and continuity in economic management. Therefore, the involvement of the Governor in partisan politics will compromise the autonomy of the CBN.”

Meanwhile, a Federal High Court in Abuja has rejected the request of Governor of the Central Bank of Nigeria (CBN), Godwin Emefiele’s, to restrain the Independent National Electoral Commission (INEC) and the Attorney General of the Federation (AGF) Abubakar Malami, from preventing him from contesting in the 2023 Presidential election while in office as the head of the apex bank.

Recall that Emefiele through his lawyer, Mike Ozekhome, had on Monday morning filed a suit against INEC and the AGF.

The court in its ruling summoned INEC leadership and AGF to appear before it on May 12, to show cause on why status quo antebellum, should not be granted to the CBN Governor.

Part of the grounds of the application reads: “That the plaintiff has aspiration to seek election to the Office of the President of the Federal Republic of Nigeria and participate as a candidate in the upcoming 2023 elections.

“That section 84(12) of the Electoral Act, 2022 provides that: ‘No political appointee at any level shall be a voting delegate or be voted for at the Convention or Congress of any political party for the purpose of the nomination of candidates for any election’.

“That the plaintiff verily believes that he is not affected by these provisions, as he is not a political appointee as envisaged by the above provisions of section 84(12) of the Electoral Act, 2022.

“That the Central Bank of Nigeria is entirely (100 per cent) owned by the Nigerian Federal Government, and therefore constitutes a government agency with the meaning and intendment of Section 318 of 1999 Constitution.”

But Emefiele is in a dilemma whether he can run. Can he run? If he can run, when must he leave office as CBN governor?

It is clear that by virtue of Section 318 of the 1999 Constitution, is a public servant. Therefore, Emefiele is only bound by Section 137 which says that a public officer shall resign from office not later than 30 days before the election.
This is the constitution and we seek constitutional interpretation of this matter.

Howevr, the judge has made an order directing the INEC and AGF to appear on Thursday on why Emefiele’s prayers should not be granted.

He ordered that all the applications, including the ex-parte, filed in the course of the matter be served on all the defendants.

He also directed that hearing notices be issued to the defendants to appear on the said date to show cause why the prayers should not be granted.