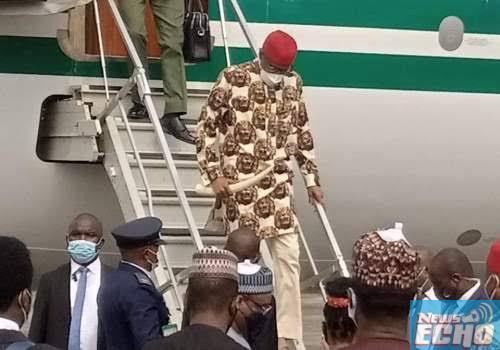 President Muhammadu Buhari is scheduled to pay a working visit to the State, during which time he will commission some gigantic projects executed by the Hope Uzodimma led administration.

In a press briefing in his office, the state Commissioner for Information and Strategy, Declan Emelumba said the president was coming to commission projects that will define the economic life of Imo people.

“Imo people are happy, excited and appreciate the government goodwill in constructing these projects that will define in a different manner, but positive, their economic and social life”.

He said the people are excited because, Owerri-Orlu Road which used to take over three hours because of bad road now takes about 15 minutes and the same going for Owerri-Okigwe Road, which is an astronomical positive impact on the economy of the state.

On the renovated House of Assembly complex which is among the three signature projects to be commissioned by the president, the Commissioner said the complex was abandoned for ten years, to a point it became completely inhabitable, forcing the present legislators to abandon the complex for their safety.

“So this governor, Distinguished Senator Hope Uzodimma, being a legislator himself saw that that was not a good sign for democracy practice in Imo State, so he decided to spend billions to rebuild the structure and not just rebuilding the structure, he equipped it with state of the art facilities for legislative business.

In continuation of the preparations for the second official Visit of the President His Excellency Muhammadu Buhari GCFR, to Imo State for the commissioning of some of the signature Projects executed by the Shared Prosperity Administration of the Governor His Excellency Distinguished Senator Hope Uzodimma which is billed for this Tuesday 13th September, 2022.

The Special Adviser to the Governor and General Manager of Owerri Capital Development Authority (OCDA) Engr. Francis Chukwu earlier today led his colleagues in the Subcommittee on Works for the Presidential Visit, to tidy up preparations at one of the commissioning sites-Banana Junction in Orlu Local Government Area of the State.

Other members of the Subcommittee on Works who equally to part in the activity include:, Engr Ikenna Adikibe, Engr Elias Nwogu and Hon Victor Ekeocha.

IPOB can’t stop Buhari’s visit, – Imo govt
Ahead of Tuesday’s visit to Owerri by President Muhammadu Buhari, the Imo State Government on Saturday dismissed the threat by the Indigenous People of Biafra to shut down the entire South-East region.

The state Commissioner for Information and Strategy, Declan Emelumba, said at a press conference in Owerri that IPOB was not in a position to threaten the President.

Emelumba, who was reacting to the declaration by IPOB of a sit-at home in the South-East states on Tuesday, said security operatives were ready for Buhari’s visit to Imo State.
“Nobody can threaten Buhari. He is the President and Commander-in-Chief of the Federal Republic of Nigeria. Imo is one of the states he governs and he is free to visit it. Security is in top gear and I can assure you that his visit will be successful,” the commissioner stated.

Elizabeth II: A constant Queen whose failings were rare

Elizabeth II: A constant Queen whose failings were rare