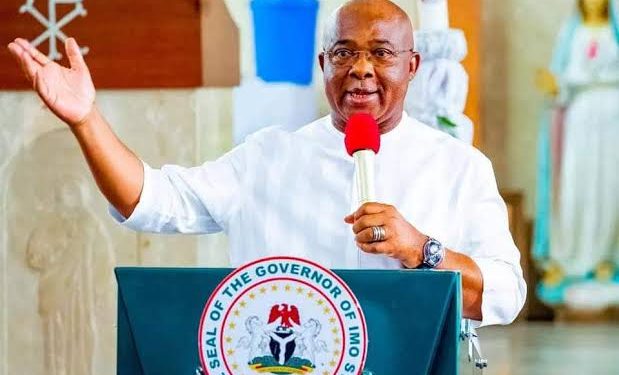 Imo State Governor, Senator Hope Uzodimma has cautioned Nigerians against the attitude of lamentation, complaints and blaming leadership where things are not going well.

Uzodimma made this caution at the Maria Assumpta Cathedral, Sunday during a thanksgiving Mass to herald the celebration of Nigeria at 62 years.

The governor appreciated the abundant human and natural resources the nation was endowed with, urging citizens to understand that every nation in the world has its challenges, that Nigerians should rather study how those nations overcame theirs and tailor the solutions to the nation’s challenges, stressing that this was the responsibility of both the leadership and followership.

“I want to assume that the common denominator is once you identify a problem, next is confront it . We must stand up as a nation to tackle the challenges that affect our progress. To understand the meaning of collective interest. What drives the nation is collective interest. How many are interested on how Nigeria can be better and if we are, what are we doing in that direction?”Uzodimma queried.

Speaking about Imo state, Uzodimma recounted the various problems that confronted the state, ranging from poor past leadership, insecurity, poor infrastructure, among others and the efforts his administration has made so far towards addressing them.

The number one citizen of the state called on all citizens of the state to join forces with the government that has come to work, listen to government’s side of the story and embrace the good aspects of it for the interest of generations unborn.

He assured that he has developed an economic growth plan that would provide solution to poverty, unemployment and insecurity in Imo state, as he pledged to do his best throughout his tenure to drive government, bring out best policies with fear of God and good conscience.

Earlier in his homily, the Archbishop Owerri Catholic Ecclesiastical Province, His Grace, Most Reverend Dr. Lucius Ugorji, called for a change of heart from leaders of all sectors of the nation’s economy. He urged all Nigerians to embrace God and shun the killings, corruption, insecurity and all other forms of vices, but seek for solution to the challenges confronting the nation.

Ex-NDE DG condemns use of Keke NAPEP, cash as empowerment instruments for youths

Ex-NDE DG condemns use of Keke NAPEP, cash as empowerment instruments for youths

Philosophy of the Economy Part Three