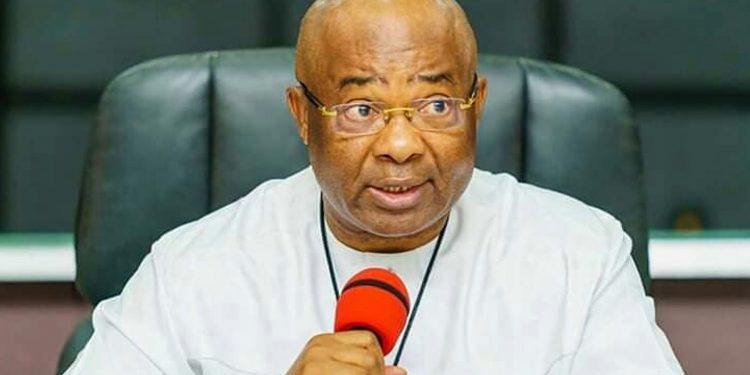 To boost the economy of Imo State for even development, Governor Hope Uzodimma has urged banks to open for business on Mondays as security has fully returned to the state.

The Governor said when the banks start operation on Mondays businesses will boom, economic generation increases tremendously because traders would be happy and more confident to sell and hence deposit their money in the banks.

This urge was made by the Governor through the Commissioner for Finance and Coordinating Economy, Dr. Mrs. Doris Anite, while responding to the Award of Excellence given to Governor Hope Uzodimma and herself by The Chartered Institute of Bankers of Nigeria (CIBN), Imo State Branch, on her Annual Bankers Dinner and Awards, held at Rockview Hotel, Owerri last week.

According to the Governor, “I know that every Monday the banks are shut for business due to insecurity. I believe the government has done a lot to contain insecurity in Imo State. Shops are opening and I want the banks to also open on Mondays. When you shut your banking doors on Mondays you are telling everybody that Imo State is shut for business. Imo State is not shut for business. When traders sell, they want to deposit their money in the banks – and if you do not have the banking doors open, you do not give them the confidence to sell for that day. We want you to support government in that regard”.

On the issue of issuance of Certificate of Occupancy (C of O) requested by CIBN to enable her build her zonal headquarters in Owerri, the Commissioner promised that her request would be granted by the Governor, stating that it is one of the priorities of the state government to consider giving C of O to notable organizations like CIBN to encourage commence and industry in Imo State with a view to strengthening productivity, as well as building the economy to improve welfare and wellbeing of citizens.

“I’m not making promises because I’m not the Governor. But I’m speaking from what I know. The issue of C of O will be a thing of the past for CIBN”, she maintained.

Harping on the theme of the event, “Building Resilience for Economic Growth in a Challenged Economy; The Agricultural Finance Option, Anite encouraged the bankers to always have a good reputation by changing the perception of the public on unethical practices associated with unwholesome practices of banking and marketing by keeping to the ethics of banking and marketing, thanking CIBN for the opportunity availed to her to firmly contribute to the advancement of banking industry. “I cannot ignore the position am today in the banking industry due to your support and professional encouragement”

Rallying point: If Imo State is a country (1)