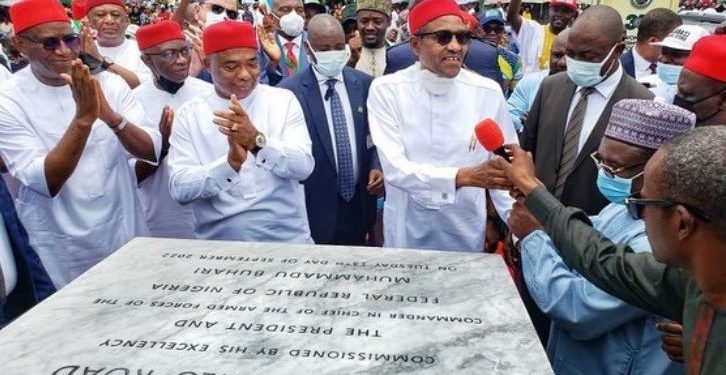 However, the day witnessed a low turnout of residents as they stayed indoors following a threatening declaration of a sit-at-home by the Indigenous People of Biafra (IPOB), in the South-East, as solidarity for its leader, Mazi Nnamdi Kanu, who appeared before a federal High Court sitting in Abuja.

The President was received by the state governor, Hope Uzodinma, and other members of his cabinet at the Sam Mbakwe Cargo Airport.
From the previous day, Military helicopters were seen flying over the sky conducting inspection within and outside Owerri, the State capital, probably to ensure the President’s visit was peaceful.

Although Monday’s usual sit-at-home has been rescinding gradually, yet many residents observed the Tuesday sit-at-home order.
It was observed that socioeconomic activities were at the lowest ebb, commercial and private vehicles plied the streets very scantly, shops locked, even as the police and soldiers were seen in strategic locations in Owerri, especially the areas where the commissioning of projects in the state will take place.

The President was in the state to commission what the Imo State government tagged ‘Signature Projects’ which includes Okigwe and Orlu roads as well as the rehabilitated House of Assembly Complex in Owerri constructed by Governor Hope Uzodinma.

Pockets of people were also seen at the points were the commissioning would hold but did potray usual coloration and fanfare that characterize such visits in the past.

However, despite appeals by Uzodinma that residents of the state should come out enmasse to welcome the President, our correspondent reports that the citizens rather obeyed the IPOB directives and stayed indoors.

Our reporter noted that most of the busiest parts of Owerri, the state capital have been deserted as residents have elected to obey the sit-at-home order out of fear of what the IPOB members could do to them, especially given the activities of ‘unknown gunmen’ of late.

It could be recalled, IPOB’s spokesperson, Emma Powerful, had, in a statement, during the weekend, ordered that banks, schools, markets, shops should remain closed, while civil servants and other workers remain indoors as the court hearing lasted.

He had said the sit-at- home was in solidarity with the leader of the group.
As a result, businesses and several other activities did not open in the South-East. In Imo State, despite the presidential visit, the state was grounded.

It was also gathered that economic activities were on also grounded in the other South-East region of Enugu, Abia, Ebonyi and Anambra states following a sit-at-home
The Biafra agitators had called for the sit-at-home in commemoration of their leader, Nnamdi Kanu’s appeal hearing at the Federal High Court in Abuja.