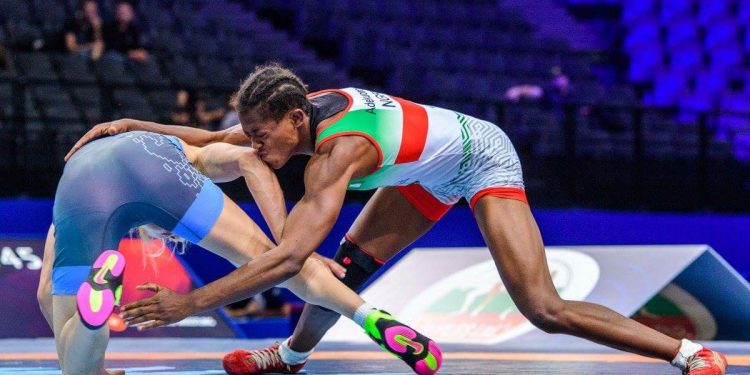 The maiden edition of Baraza Champion of Champions wrestling competition came to an end in Yenagoa, with Blessing Onyebuchi, Amas Daniel and teenager Mercy Adekuoroye all impressively claiming the last three gold medals at stake on the final day of the competition.
World champion in beach wrestling Onyebuchi displayed absolute class and utter dominance to land gold in the 76kg class in her first tournament in almost a year, no thanks to Covid-19 pandemic.

The 2019 African champion recorded four consecutive pinfall wins; 6-0 against Rhoda Shonde, 2-0 over Dami Ojo in just 56sec and 6-0 against Teme Deyei, before overcoming former African champion Winnie Gofit of the Nigerian Army 6-0 in the final to claim gold, to the admiration of Bayelsa State Governor Douye Diri, who graced the grand finale of the tournament.

In the 53kg WW event, Mercy Adekuoroye, younger sister of Odunayo, caused a huge upset by defeating former African champion and favourite Bose Samuel to claim gold.
Adekuoroye, a former cadet African champion, showed great determination and resilience to record a shock 7-3 win against her more illustrious and experienced opponent in the final.

In the only Freestyle event on the final day, multiple African champion and Commonwealth silver-medalist Amas Daniel made a mincemeat of his opponents in the in the 65kg weight category to grab gold in emphatic and ruthless fashion.
The Bayelsa State wrestler came from a point down in the first round of his first bout to thrash Fisayo Kolawole 12-1 and followed that up with two 10-0 technical superiority victories against Saliu Rasheed and Ebiere Bayefa to secure a spot in the final.