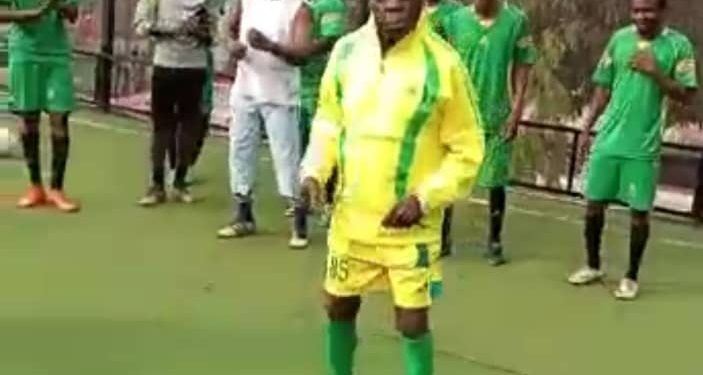 Former Head of State Rom 1976 -1971 and Former President of Nigeria from 1999 – 2007, Olusegun Mathew Obasanjo, have for several decades, been one of the dominant figures in our national discourse. On several fronts, he has served the nation. 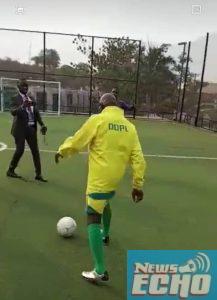 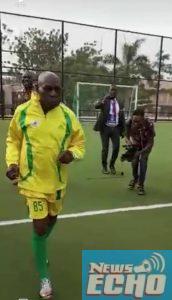 In celebration of his 85th birthday recently, he participated in a novelty match played at the 5 Aside football pitch of the Olusegun Obasanjo Presidential Library in Abeokuta, the Ogun State capital.

The event which is part of activities marking his 85th birthday celebration, drew the presence of the 91-year-old President of Benin Republic Nicephore Soglo, a former Minister of Justice and Attorney General of the Federation, Chief Bayo Ojo, among others sport enthusiasts.

Former President Obasanjo, who was the captain of his team displayed his dexterity in the art of football as his team defeated the Ogun State Government led by the Deputy Governor, Noimot Salako Oyedele, by four goals to two, with the former president doing the goals.

He attributed his agility to the grace of God and therefore recommended what called “DREMS” as his health sustaining guide. DREMS according to him represents four (4) key life applications and therapy: D-Diet, R-Rest. E-Exercises, M-Medical attention and S- Social Interaction which believes is most suitable for the elderly to keep them healthy.

However, President Muhammadu Buhari, who claims to be 79 years in a tribute issued by his Special Adviser on Media and Publicity, Femi Adesina, said Obasanjo’s influence has continued to resonate beyond the country, extending to the international community and multilateral institutions.

The statement reads: “On behalf of the Federal Government and Nigerians in general, President Muhammadu Buhari felicitates with former President Olusegun Obasanjo on his 85th birthday, joining family, friends and associates in celebrating the joyous occasion.

“President Buhari believes the former Head of State, 1976 — 1979 and former President of Nigeria, 1999-2007, is a study in patriotism, leadership and courage, leading the country to democratic government in 1979, and taking over the reins of power as elected President in 1999.

“The President affirms that the former President’s influence continues to resonate beyond the country, extending to the international community and multilateral institutions.

“As a former military and civilian leader, with a strong network nationally and internationally, President Buhari extols the wisdom, insight and versatility that Chief Obasanjo brings to bear on things, reflecting his experience, diligence and versatility.

“On his 85th birthday, the President joins family members in thanking God for the life, health and alertness of the former leader, praying for grace and more strength as he serves country, Africa and the world.”

All Progressives Congress (APC) National Leader, Asiwaju Bola Tinubu today congratulated former President Olusegun Obasanjo on his 85th birthday, praising him for his patriotism and unfailing commitment to the unity of the country.

In same development, a congratulatory statement on the birthday of the former president issued by his Media Office, Asiwaju Tinubu, who claims 69 years of age, said: “At 85, Baba Obasanjo remains strong, agile and committed to the greatness of our dear nation.

Our debates have been spirited yet always professional and without personal animus. Through it all, I have come to respect his love of country and legendary work ethic. President Obasanjo has worked tirelessly for Nigeria, Africa and indeed the black race.

“President Obasanjo has earned his stripes as an important statesman on the world stage.

“Baba Obasanjo is bold and courageous and will continue to be so for that is the essence of his character.

“On this occasion of his 85th birthday, our prayers is that God Almighty keep Baba with us for many more years. May God grant him good health and ceaseless energy to continue to be of service to this country he loves so dearly, Amin.”

But, can President Muhammadu Buhari and Asiwaju Bola Ahmed Tinubu, play a novelty match for 30 seconds?