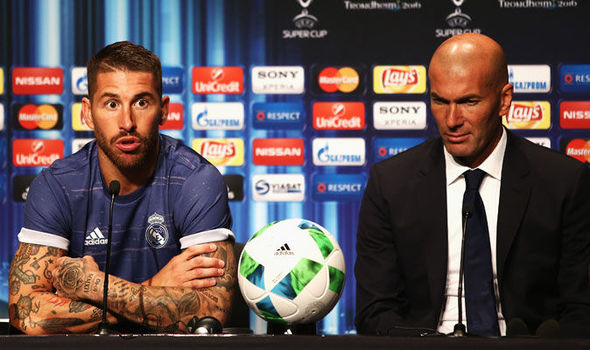 Real Madrid captain Sergio Ramos asked the players to give “an extra push” at an emergency squad meeting on Thursday morning. Zinedine Zidane did not attend.

Real Madrid’s first team players gathered for an emergency meeting, thursday morning at the club’s Valdebebas training ground to discuss the state of affairs ahead of their Champions League clash with Borussia Monchengladbach next week – a must-win tie following Los Blancos’ embarrassing 2-0 defeat to Shakhtar Donetsk on Tuesday. The meeting also served to reinforce the position of under-fire coach Zinedine Zidane, who is understood to have the support of the core group in the dressing room, including captain Sergio Ramos, Luka Modric and Marcelo. After the meeting, the squad posed for the official team photo with club president, Florentino Pérez.

Club captain Sergio Ramos organised the squad meeting and has demanded his team mates give “an extra push until the end of the year”. “We are one victory away from getting through in the Champions League, we depend on ourselves and we have to give everything. This is Real Madrid, gentlemen.

Together, we’ve come out of worse,” the captain told his teammates. Modric, meanwhile, who usually doesn’t speak up much, also reminded his team mates that “we have to be united and win the next few matches — we can do it.” While Zidane himself did not attend, he has been informed of the players meeting and its main conclusion, which is that the French coach has the support of the dressing room, or at least the main group of players.

Some periphery players, like Isco or Mariano, are not as aligned as the others when it comes to their thoughts on Zidane. Club president Florentino Pérez was also at Valdebebas but only passed by the training ground to partake in the official squad photo. Pérez returned to his office after greeting the coach and the players and did not enter into a conversation about the meeting.

5 things you should never do to please a woman