60 years of sports in Nigeria 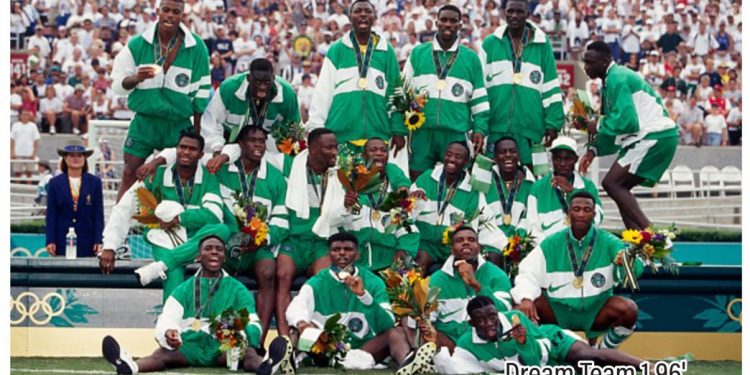 Nigeria’s 60 years independence anniversary would have been celebrated with pomp and pageantry if not for the global crisis caused by the covid-19 pandemic which has altered the way we live our lives, leaving in its wake, a new normal, and sports is by no means an exception. In 60 years of existence, one of Nigeria’s major achievements is said to be her ability to remain a united nation after surviving the civil war in 1968, eight years after Independence.

However, as a multi-ethnic nation, the country still faces threats of secession from aggrieved tribes as being witnessed presently in the Biafra agitations.

Interestingly, most Nigerians, including President Muhammadu Buhari believes Nigeria is indivisible and must remain a united nation.

The sporting fraternity will not be left out of the celebrations. It is common knowledge that even as Nigeria has not lived up to her potentials in sports, the sector has remained one of the country’s most potent agent of unity just as it is a serious diplomatic tool.

However, the general consensus has remained that Nigerian sports has failed to live up to its full potentials as the country’s sportsmen and women have been blowing hot and cold at international competitions since Independence.

It is pertinent to recall that even before Independence, some Nigerians had made appreciable impact in global sports. Such Nigerians who come to mind are Emmanuel Ifejuna who won a gold medal in high jump at the 1954 commonwealth Games, Hogan Kid Bassey emerged World Featherweight Boxing Champion in 1957 as well as Dick Tiger who won the Middleweight title and later the World Light Heavyweight crown. These were indeed remarkable feats that prepared the ground for Nigeria’s exploits after independence.

At the attainment of independence Nigeria gradually shook off the shackles of colonialism as she began the process of development in all spheres of her existence. The first step towards sports development in Nigeria was the setting up of the National Sports Commission in 1963 with Late Pa Abraham Ordia as the Secretary.

Unfortunately, the former minister of sports, Barrister Solomon Dalung scrapped the commission and sports was in the care of persons other than trained sports administrators. The clarion calls for the return of the NSC have fallen on deaf ears until the emergence of Mr Sunday Dare, a far right when you consider the professional background of erstwhile sports Ministers. The Edo 2020 National Sports Festival would have been the first in a while to be organised under the Oyo Born Journalist and businessman cum Sports Minister but had to be postponed indefinitely due to the much document impact of Coronavirus after Edoi state spent hundreds of Millions to put together what would have been one of the most memorable and digitally organised sports meet in Nigeria’s sports history.

The idea behind the setting up of the National Sports Festival in 1976 was for the discovery of raw talents that would be nurtured to represent the country in international competitions. The first edition in Lagos was attended by over 6000 athletes. The festival was another balm that helped in healing the wounds of the civil war.

Thus, early 1960, Nigeria’s emphasis was on putting up solid structures for sports development and the first fruits no doubt was the qualification of the then Green Eagles for the Olympic Games held in Mexico in 1968.

Nigeria stepped up the gear in the 70s with her active participation in continental and global competitions. In 1976, Nigeria hosted the 2nd edition of the All Africa Games and the then Green Eagles won the gold medal in football just as the country placed second on the overall medals table.

The feat attained by the Green Eagles at the Games was replicated by the then most famous football clubs in the country, the IICC Shooting Stars of Ibadan and Enugu Rangers who won the Africa Cup Winners Cup in 1976 and 1977.

The achievements made in the 70s continued into the 80s still within football as the Green Eagles improved on the bronze medals won in the Africa Nations Cup in 1976 and 1978 to win gold in 1980 on home soil when the Christian Chukwu captained Eagles defeated Algeria 3-0 in Lagos to lift the continental trophy for the first time.
However, Nigeria’s first triumph on the global stage in football since the time of Independence came in 1985 when the Golden Eaglets shocked the world to win the maiden FIFA/KODAK U17 championship in China. The Flying Eagles also reached the finals of the 1989 FIFA U20 World Cup in Saudi Arabia before losing to Luis Figo inspired Portugal.

Nigeria also won silver and bronze medals in the male and female categories of 4 x100m at the Barcelona Olympics in 1992 to announce her potentials in world athletics just as the Super Eagles won their second AFCON title in 1994 in Tunisia. The Super Eagles also made their first World Cup appearance in the same year in the United States of America.

Indeed any piece on Nigerian sports would remain incomplete without a mention of the 1996 Atlanta Olympics which witnessed Nigeria’s most glorious moment in sports. The Dream Team 1 led by legendary Kanu Nwankwo stunned the world to win Nigeria’s second Olympics gold medal hours after Policewoman Chioma Ajunwa had won the first and till date the only individual gold medal at the Olympics. She achieved the feat in the long jump event.

Although Nigeria has failed to build on the success of Atlanta ’96, the country has recorded other victories in world and continental events like the 2003 All Africa games she hosted in Abuja, the 2007 FIFA U17 World Cup in South Korea, Super Eagles victory at AFCON 2013 in South Africa for their third title, the triumph of the Golden Eaglets in 2013 and 2015, the D’Tigers first title in Afrobasket in 2015 in Tunisia, the recent victory of D’Tigress in the 2019 Afrobasket Women Championship in Senegal and the ten African titles won by the female national football team, the Super Falcons.

Others are Late Rashidi Yekini, Innocent Egbunike, Mercy Mku, Fatima Yusuf, Chidi Imoh, Bose Kaffo, Hakeem Olajuwon, Nduka Odizor, Atanda Musa, Late Stephen Keshi, Nduka Odizor, Late Mike Opara, David Imonite, John Mikel Obi, Blessing Okagbare, among several others. There are however new kids on the block rearing to continue from where their predecessors left off Victor Osimhen who recently broke the transfer record in club football for a Nigerian player with his €60 million transfer to Napoli. We have others such as Divine Oduduru making waves in athletics, Odunayo Adekuoroye who shattering every record available in wrestling not forgetting the paralympians who never disappoint when it comes to the Paralympics.

These names have etched the country’s name in gold among sporting nations of the world but most Nigerians are of the opinion that the country has failed to live up to her full potentials in sports when compared with less populated and endowed African countries like Kenya, South Africa, Ethiopia in world athletics and the Olympics.

Thus, it can be said that it has not been sunshine all through as Team Nigeria had its own share of failures at international competitions like the 1988 Soul Olympics and London 2012 Olympics where Team Nigeria could not win a single medal. Even in the 2016 Rio Olympics, it as the Dream Team’s silver medal that saved the ugly situation for Team Nigeria. The Covid-19 botched Tokyo 2020 olympics may have been the same story.

So in over 13 Olympics appearances, Nigeria has only managed to win two gold medals. This is indeed a miserable record when compared with what other smaller African nations like Kenya and Ethiopia have achieved.
It must be mentioned here that Nigeria’s saving grace are the Paralympians who have remained very consistent in their performances. Most of these physically challenged athletes like Monday Emoghawve, Edith Nzuruike, Adekundo Adesoji, Eucharia Njideka,Yakubu Adesokan,L ucy Ejike, Paul Kehinde, Ezuruike Roland, Orji Josephine, Onye Lauritta and Nwosu Ndidi took turns to break and set new world records in their events.

Although football has brought fame and honour to Nigeria, the country is yet to fully realise her potentials in the game. In five appearances at the FIFA World Cup, Nigeria with its array of stars is yet to reach the semi-finals.
Off the field of play, Nigeria has not been left behind in the politics of international organisations as some notable Nigerians like the late Orok Oyo, Dotun Segun, Habu Gumel, Amos Adamu, Sani Ndanusa and Violet Nwajei-Odogwu, Awoture Eleaye and late Abraham Ordia, among others held executive positions in different international sports federations.

Interestingly, Nigerians like Ndanusa, Gumel, Wahid Oshodi, Amaju Pinnick are actively involved in sports politics on the continent and the world.

Apart from winning some medals at the global stage, Nigeria has also played host to other nations on several occasions when she hosted international competitions like the 2nd and 8th All Africa Games, the 1999 FIFA U20 World Cup and the 2009 FIFA U17 World Cup.

It is also encouraging to note that successive governments have shown interest in sports as the nation boasts of some sporting edifices like the Abuja national stadium. Although most of these facilities like the Lagos national stadium have been left to decay, Nigerian athletes out of determination and dint of luck have continued to prove that all hope is not lost.

However, most Nigerians still view the sector with mixed feelings because so much is promised by sports but so little is offered in terms of achievements. This is usually attributed to poor management of human and material resources.

Unfortunately, there are no signs of immediate recovery as the present trend which has seen Nigeria missing out of international competitions is said to a source of great concern.
Under the present administration, Nigeria has failed to attend at least six important international tournaments and the most disturbing fact is that nearly all the competitions are for youth development.

The implication is that Nigeria is squandering the opportunities offered by these competitions for her to discover athletes who would represent the country in future. Already the law of diminishing return has caught up with the likes of Segun Toriola and Funke Oshonaike who have been around for decades.

Even as achievements in the sports sector have fallen short of expectations, it cannot be denied that there have been some glorious moments and if the sector is re-organised with the right people at the helm of affairs, more achievement would be made in the near future.

There is no doubt that sports in Nigeria is on the decline but the entire world knows that Nigeria’s problem is not talents but how to harness and utilize the talents that abound in the nooks and crannies of the country.
So for sports in Nigeria, there isn’t much to celebrate but there is certainly something to think about as the country clocks 60 years.

Blast from the past – The way we were

Blast from the past - The way we were