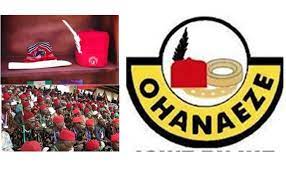 0
SHARES
42
VIEWS
Share on FacebookShare on TwitterShare on Linkedin

The National Youth Wing of Ohanaeze Ndigbo worldwide has called on President Muhammadu Buhari to as a matter of urgency assent to the South East Development Commission bill passed by both chambers of the National Assembly.

The duo recalled that the 8th Senate on December 12, 2018, passed the bill for the establishment of the South-East Development Commission, and one week to the end of the 8th Assembly, the House of Representatives also had on 28th May 2019, passed the same Bill, but wondered why the President had not considered it necessary to assent to the bill.

“The implementation of the policies will ensure sound and efficient management of the resources of the region and it’s also expected to provide a master plan for the reduction of unemployment while also providing the master plan and schemes to promote physical development of the South East region”, the group explained.

The group urged President Buhari to assent the bill in order to assuage the current agitations by the people of the region, saying that until some of the issues of obvious injustice against the Igbo are seen to be addressed, the country would continue to stand on a wrong footing.

“The bad state of roads in the South East is nothing to write home about. Enugu-Onitsha federal road is now a dead trap and so many others. Our public health care system has been totally abandoned. Public Schools in the region are in their worst conditions. Our businesses have been paralysed due to epileptic power supply and social amenities now a luxury in the region. All these have culminated into the high rate of unemployment and underemployment now witnessed in the region. This marginalization and neglect have given rise to uncontrollable agitations by different groups in the region,” the statement added.

North as the problem of Nigeria