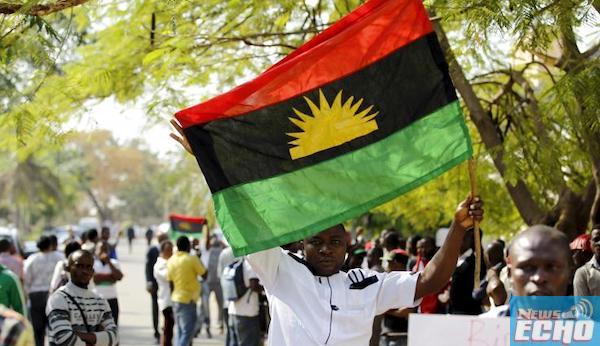 The Indigenous People of Biafra (IPOB) on Tuesday warned politicians to stop linking them to the incessant criminal activities in the Old Eastern Region. IPOB said that it is info that they have been linked to the incessant abductions, killings and humiliation of all manner of criminalities in the Eastern region for quite some time now.

Comrade Emma Powerful, IPOB spokesman said that the government in the country and her compromised security agencies against the innocent citizens with politicians are doing their best to demonize the Pro-Biafra group. “IPOB reminds politicians that the time has come for them to turn a new leaf, desist from making themselves available to the enemies of our people to use as tools of destabilising the Eastern Region and cause anarchy in our land or be ready to face the consequences that will follow these men of perdition must stop linking IPOB with their evil actions because we are not morally bankrupt as they the political harlots they are,” he said.

Powerful said that IPOB is a very disciplined, very focused freedom movement which has no business with political criminals and does not have any business with criminality nor does it engage in any form of criminality. “If we engage in crime, we will be delaying the coming of an Independent Biafran Nation and we certainly have no intention or desire to delay the freedom and liberty of the Biafran people.

“IPOB has no plans neither are we complicit in the political killings, kidnapping of religious leaders and business people going on in our territory but these evil politicians working for the Nigerian government are behind and sponsoring all criminalities going on and we must be held accountable. “We cannot be involved in killing people we labour for, spend our resources and our lives to protect unlike the Fulanized stooges (politicians) in our land.

“The Nigeria Police, Army and DSS agents deployed in our land from Abuja are the key actors in the kidnapping and unlawful and unprovoked killings going on in Anambra, Abia, Imo Ebonyi and Enugu states,” Powerful alleged. He said that IPOB is aware of the criminals some unscrupulous persons created to demonise IPOB and Eastern Security Network (ESN) and is also aware of the plans to murder politicians and businessmen and women and blame it on IPOB. “We are therefore reminding these political jobbers in our land to stop sponsoring political thugs against their opponents and thinking they will demonise and bring IPOB down. It’s not possible for them.

“IPOB members are not politicians and we don’t believe in the selection process Nigeria and its Government call election. Nobody should link IPOB with the massacre and killings and kidnappings going on in the Eastern Region. “We have published names of some of those politicians and their thugs responsible for these criminalities happening now in the region as well as the Nigerian Army harbouring in their Barracks Fulani terrorists masquerading as herdsmen to attack our land and kidnap for ransom.

“IPOB can not engage in such cowardly act, it is abominable, we are not politicians nor do we have rival opponents in our fight to Liberate our land and people in it, we concern and occupy ourselves with freedom and security of Biafrans and therefore cannot afford to kill those we are fighting for their freedom. “IPOB is hereby alerting our people to be careful with whom they do things because there is danger ahead which is the result of our politicians having sold out their people for a pot of porridge.

” He said that anybody linking IPOB with the criminal acts happening in the Eastern region will have IPOB to contend with, as IPOB would not allow anyone to drag our hard-earned International standing and reputations into the mud. “If we are terrorists the European Union (EU) cannot afford to allow IPOB to demonstrate in their headquarters in Brussels Belgium.

Therefore, anybody or media who report IPOB as a terror group or proscribed group should purely examine themselves in the psychiatrist centre. “We are not interested in the selection process called Nigeria election, yet we cannot afford to allow anyone or group behind the killings and kidnap in our land to continue.

“Politicians in the Eastern region must desist from evil acts such as using thugs to attack their perceived political stumbling block with the evil intention that IPOB would be blamed without investigation. “Whosoever allows himself/herself as willing tools in the hands of politicians would regret such action soon.”