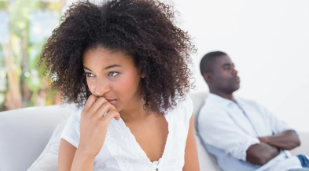 Getting involved with someone, especially with the intent of going all the way, should be a no-holds-barred affair.
So ideally there should be no such thing as suppressed feelings and unexpressed emotions.
However, for some men, especially the inexpressive ones [aka hard guys], this is a real issue they can’t shake off. Whether as a control mechanism, a defense strategy or just out of plain cluelessness, many men have been tagged as creatures who hold back emotions and refuse to truly assess and express the romantic feelings they have at several times, including times when they have partners.
If you ever find yourself dating such a ‘hard guy’, here are the pits you should be ready to encounter in such relationship:

1. Confusion
One the problems you will experience dating a man who is inexpressive and finds it difficult to express himself is confusion, misunderstandings and constant misconstruing of his intentions.
In a situation, you might think something while your partner has something else in mind other than what they are really feeling about the situation. This always leads to misunderstandings and too many avoidable fights that can ruin a healthy relationship.

2. Feeling unappreciated
Women have a reputation for being easily-swayed by words, especially if they already like you. Words, especially complimentary ones, are also useful in keeping a woman feeling treasured, appreciated and desired
Now imagine having a guy who never gasses you up in any way, rarely assuages your doubts or reassure you of his undying affection for you – kinda tragic, yeah?

3. Someone else
When you get pissed with your inexpressive guy over his constant failure to express feelings or dish out validation, you may start finding solace in something else. It could even be another human being.
If someone else starts filling the gap, you will gradually getting far away from your partner. And when this happens, the end of that relationship becomes visible in the horizon.

5. Boring relationship
If someone likes forming inexpressive hard guy even with you his girlfriend, it is very likely that your relationship with him will be boring. We already mentioned here how fun it is when both partners have an insane sense of humour and can both give and take jokes.
We don’t think that will apply much in your relationship if your boyfriend is inexpressive.

How to determine sexual compatibility without having sex

Umahi’s defection to APC: So what about presidential ambition?