Uzodinma as the long-awaited wise man from the East 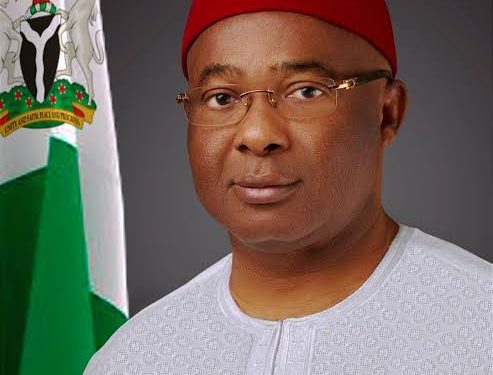 Recent events at the national level of governance have clearly proved that Dist. Sen Hope Uzodinma is an embodiment of a statesman par excellence.

It has remained a wonder to many that our dear governor due to his nationalistic spirit has come to be a unifier in the matrix of national politics. The huge roles he played in stabilizing the All Progressives Congress before the convention have remained a case study to pundits.

His strategic appearances at select national televisions, the prognosis he made and the bold assertions he postulated, had all gone the way he made them.

The convention which has come and gone was a life saver for the governing party as many who had feared an implosion of a sort were utterly disappointed.

In like manner, the governor has kept disappointing clairvoyants of doom who hardly gave him a chance to succeed. With a plethora of ambitious, multi-billion naira projects ongoing across Imo State, many self-appointed enemies of the state have licked their words and wounds, as the State of Imo marches steadily and gracefully to glory.

A fleeting appraisal of the heroic virtues of Gov Hope Uzodinma may perhaps suffice for people looking for the secrets of the unprecedented and impressive national figure the humble governor has come to be in Nigeria.

Essentially, Gov Uzodinma has a very humble character. He is like a tiger that does not boast of his tigritude.

Even when he has been massively blessed by Providence, a vintage Gov Uzodinma is still very unassuming, not given to flagrant display of opulence, not given to unguided acquisition of wealth or mindless possessions of properties.

Here is a man whom no one can safely accuse of enriching himself with the patrimony of Ndi-Imo.

Never has it been heard since he became governor that he signed papers to acquire land for himself or associates. Instead, he has been adept in returning lands forcefully taken from the owners by the previous government.

Even the clothes he wears seem to be the same year-in-year-out. The wrist watch he dons also appears the same. He hardly walks with the conventional braggadocio of a powerful man, choosing rather to lead a measured and modest life.

An essential Gov Uzodinma is a man of piety and devotion. He fundamentally does not miss mass every Sunday. He sees his life as dependent on his religious worship.

While in Abuja as Senator, the governor had a tradition of not missing the daily mass at the Catholic Church in Maitama. Now, this paper does not assert that devotion to mass makes one pious, however, there is a form of inherent discipline and commitment to godliness that come with devoting one’s time to a daily act of worship, a personal life style of the governor’s that has remained unchanged by status and routine-change.

This sense of piety has also made the governor magnanimous in heart – a man who begrudges no one – carefully eschewing bitterness, vendetta and acrimony – ensuring egalitarianism in the state. It is noteworthy that Gov Uzodinma is a man in a different garb; for here is a man who does not intimidate anyone, including sworn foes with the paraphernalia of his exalted office.

Furthermore, an essential Gov Hope Uzodinma is somewhat reticent, carefully avoiding the garrulousness of chief executives whose intent is to deceive, malign and overwhelm others. To be clear, Gov Uzodinma is a strategic communicator like world leaders whose statements are policies when interrogated.

Here is a governor that has tenaciously institutionalized stakeholders’ parleys in the state, where he comes to give a quarterly account of his stewardship to religious, community and political leaders in the state.

This rare act of statesmanship has given room to socio-political cohesion in Imo State. I hear that the new governor of Anambra State is about following the footstep of the Imo Governor in this regard. There is a lot to gain by giving a state-of-the-state address to stakeholders.

Having maximized this gain, Gov Uzodinma has been able to carry everyone along in his Shared-Prosperity government.

Remarkably, it was the result of the stakeholders’ parleys that gave breath to the people’s budget of 2022, a financial plan that succinctly captures the aspirations of the populace across the state.

Also, Gov Uzodinma is a very careful spender. Between 2020 when he ascended office and now, the Governor has proven that he is a stickler to budgetary provisions. He does not wake up one day and engage in contract bazaar and spending spree to please associates.

It is clear to even the closest of associates that this governor has come to work and nothing else, but work. It bears stating that having a relationship of any kind with the governor does not translate to his favouring one with the patrimony of the state.

With legacy projects evenly spread across the state, the governor is single-minded in completing them for use. Already the landscape of the state is undergoing tremendous transformation. Quality roads like never before are dotting the landscape and visionscape.

Motorists now drive with pleasure and sometimes abandon. Soon, there will be road infrastructure and management measures that will ensure that drivers drive at a prescribed speed as the beautifully constructed roads are making excited drivers, who obviously are obsessed with the smoothness of the roads, to be driving at a breakneck speed.

Not even the politically-sponsored pockets of insecurity in some parts of the state are stopping the governor in his avowed commitment to deliver the ‘goods’ to the people.

Coming to the national scene with a sense of purpose and discipline as has been exhibited in Imo, Gov Hope Uzodinma has proven to be a unifier in APC, a party that he has obviously given name and status in the Southeast.

It is worth saying that Gov Uzodinma is steadily charting a cause for the Igbo at the national level with his nationalist spirit.

And being so beloved of the President, the governor is ensuring that the stake of Ndi-Igbo at the national scene remains high even as the All Progressives Congress holds the political ace, amid a fledgling opposition.

Thankfully, Ndi-Igbo now have a rallying point, a sage and mediating personality, whose political fame grows with the speed of a lightning. His name is Dist. Sen Hope Uzodinma, a two-term Senator and Executive Governor, Imo State. Hon. Sam Osuji, a political analyst, writes from Owerri.

Panic in Aba, as yet to be identified people declare war on suspected cultists