Inflationary trends and lamentations of consumers 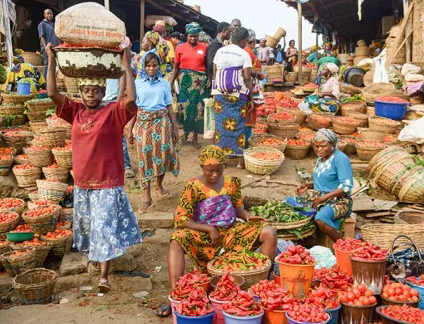 The underlying factor causing the incessant increase in the prices of food items and other essential commodities in the state today, have been uncovered.

A recent Vox Pop carried out on buyers across the two major markets in Owerri, the defunct Eke Ukwu Owerri and the Relief markets disclosed that most traders are exploiting the Corona virus pandemic to indiscriminately increase prices of food items, thereby leaving the consumers groaning seriously and are weighed down to death because of the difficulties of meeting with some basic needs.

Our findings revealed the emotional and psychological torture some buyers go through as a result of intensive mental calculations after each visit to the market when weighing the outcome of their purchases. This is in addition to other domestic stresses that are confronting them. They struggle on how to make ends meet with the little resources at their disposal.

Are you surprised that in recent times money spent is not equivalent to the quantity of items purchased. One of our respondents shockingly took it further by pointing out the possibility of some traders using black magic to influence buyers to part with certain amount of money unknowingly. However, funny this might sound, yet it cannot be completely ruled out.

This is viewed from the fact these days’ people have become desperate for survival and can do anything just to keep hanging on to life. We have heard of such bizarre things as using a woman’s pant for money rituals, money doubling, etc. The so called yahoo boys have over dramatized things and so it is not impossible to look in the direction of that theory.

In recent times, prices of major food items, such as, rice, beans, garri, yams, onions, pepper and oil have witnessed a hundred percent increment. Before the lockdown, a pint of rice which sold for 1,500 naira rose to 2,500 naira. One tuber of yam which sold at 400 naira also rose to 800naira. A bunch of pumpkin leaves which sold for 50naira increased to 100 naira. Proteins, such as , meat, fish, stockfish and chicken are now considered as luxury foods because of unaffordability.

During the Corona virus lockdown, traders cited exorbitant cost of transportation and high handedness of security operatives at the entry and exit points across the states, as the reason prices of food items have skyrocketed.

However, the lockdown directives of the federal government have eased to an extent; yet, prices of commodities have continued to rise endlessly. Many have explained that the prices will not come down anytime soon because of other factors which have also affected cost of production. The pandemic it seems had affected everywhere. The globe by virtue of technology has become inter-connected.

A trader at Eke Ukwu explaining the situation had denied that they are responsible for the increased prices. Martha, a trader in salad and vegetable items said, “we dey sell as we dey buy, no gain for these things o. Corona drive people commot farm, na so dey tell us”.

Observations by the reporter indicate that even though that there are genuine reasons such as transportation challenges and other factors which may have necessitated the price increases there are also obvious signs that the situation is being exploited by the traders. It is on this account that we call on the government to take steps to intervene. Though this may be difficult to achieve 100% some degree of price regulations as in the days government had the Price Control Board (PCB) will go a long way.

Again it is noted that government policies should run in a manner that it should be welfare oriented catering for the masses and supporting their basic needs by the traders. It is on this account that we call on the government to take steps to intervene. Though this may be difficult to achieve 100% s o m e d e g r e e o f p r i c e regulations as in the days government had the Price Control Board (PCB) will go a long way.

Again it is noted that government policies should run in a manner that it should be welfare oriented catering for the masses and supporting their basic needs of food, housing and security.

Looking back at Covid-19 invasion