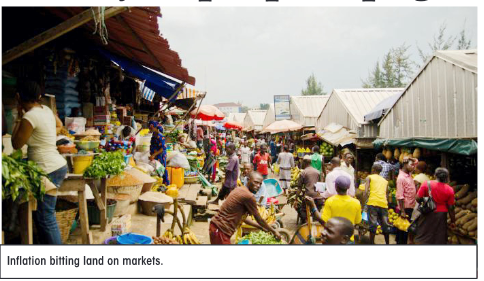 Hunger is seriously ravaging people across the country. People with little means of livelihood are suffering so much. They have been groaning under excruciating pain and lack.
Inflation, unemployment, harsh government economic policy, lack of social infrastructure such as electricity, quality and affordable education, healthcare system, safe and regular water supply, good road network and solid market structure and safe environment are major factors militating against people’s progress and comfort.

The experience of hardship in the society got wort in 2015 with the inception of APC led federal government presided over by President Muhammadu Buhari Due to the federal government’s harsh economic policy, the economy depreciated as foreign exchange went out of hand, inflation set in, plunging the nation into economic recession, people living from hand to mouth, started to agitate for a better society.

It is worrisome that inflation is growing uncontrollably day by day as people have continued to groan under hunger and anger with government showing no concern to enhancing the economy and meeting the numerous challenges confronting people adversely.

Prices of goods and services have skyrocketed to uncontrollable height. In the open market, prices of commodities such as rice, onions, tomatoes, beans, fish, vegetables, oil, garri, floor among others are very  exorbitant that those with low income can hardly afford them.

Thus, in his essay: “On Nigeria Sovereignty, Hunger, American Visa and Electoral Criminality” in the Vanguard newspaper of Monday, September, 28, 2020, edition, Owei Lakemfa said that he was “personally worried about the Buhari government’s level of delusion. At no other time in our history have Nigerians been subjected to so much depreciation, hunger and hyperinflation. By the end of August, a bag of imported rice had risen to N32,000 from its 2015 price of N8,500 under the previous administration. Local rice which wasN6,000, rose to N25,000”.

Furthermore, Owei quoted the National Bureau of Statistics (NBS) as reporting that “the country’s inflation has risen to 13.22 percent. The NBS said the rise in the food index was caused by increases in prices of bread, cereals, potatoes, yam and other tubers, meat, fish, fruits, oils and fats and vegetables”.

Owei lashed Buhari and APC administration for living in a different world where lies are cheap for mentioning that cost of food is coming down.
According to Owei, “the Senior Special Assistant to the President on Media and Publicity, Garba Shehu, on Channels TV, said “as of yesterday (September 10,2020), go and check the index in markets which put a lie to the statement by the president’s media aide. For instance, in Kano- millets that had gone up to N24,000 has now gone down to N12,000, N13,000. Rice that had been N25,000 is now N20,000. Corn is now N18,000 N15,000 for the new stock”.
Owei concluded that “the APC led federal government lives in a delusionary world, while citizens live in the real world” where truth is the golden rule.

Inflation which is described as an “economic situation when the increase in money supply is faster than the new production of goods and services in the same economy”, has a negative effect of price instability which dwindles or slows economic growth and brings hardship to the people.

Orubu (2019), in Journal of Economics and Sustainable Development, stated that “inflation is caused by rising cost of goods which is often taken to be counterproductive and negative to an economy. The most significant effect of inflation is its impact on the revenues of the government…it is also responsible for inefficiency and non- performance of an economy”.
Between 2019 and 2020, Nigeria according to World Economic Index, ranks 3rd on inflation rate (of 11.40%) across the world, Angola 2nd position (with 17.15%) and Sudan ranking first position (with 50.99%). This is a gory tale for a country which prides itself as the giant of Africa with rich mineral deposits.

Inflation is worst in the South East, particularly Imo State, where there are bad roads, poor electricity supply, dirty market environment, high cost of transportation and illegal task collection, police, military, and customs extortion of commercial transporters on Clearly, most food consumed in the South East and some parts of South South are being imported from the North and South West who always give excuse of increasing food items to suite their capital and profit to high increase in prices of goods bought from the original producers.

Hearing from most traders at Ekeukwu Owerri Market, Relief Market and Cluster Market, Owerri, they revealed that some traders are not intentionally hiking the prices of goods in the open market because they are equally consumers who buy other items they do not sell. They blamed the high inflation rate on government for increasing tariffs on electricity bill, petroleum, cooking gas, kerosene, diesel products prices including bad road network and other anomalies.

As Onions, tomatoes, rice, beans, yam, fish, egwusi, ogbono, garri, oil, vegetables, corn, groundnut sellers confided that “we sell as we bought. If we no get our capital, we no go come market again and consumers including us go suffer from starvation”.
They told government to “remove tariffs on electricity bill, reduce petroleum, gas (cooking gas), diesel, kerosene prices, rehabilitate roads, stop police, army and customs from extorting commercial transporters on the road”, an anomaly they lamented has gone out of control.

On their part, consumers decried rising inflation of commodities to which they frowned was weighing heavily on them, as they called on “government to do something urgently to save us from biting hunger. House rent should equally reduce because landlords are capitalising on electricity tariffs, petroleum product hike and bad roads to abysmally increase their house rents without consulting us or minding our plight”.
It is necessary at this point to request government to stop shying away from the economic and social needs of the people who they swore to uphold their interests and do the needful to keep their body and soul together.
People are really suffering from hardship, many are dying from diseases and sicknesses because the leaders do not care of their welfare and wellbeing. Hospitals are not supported with the required medicines and necessary facilities to function effectively.
Government has a big task of fixing roads, hospitals, electricity, schools, markets, creating employment opportunities for the people and paying workers and pensioners duly and regularly.

Government, should as a matter of necessity, bar police, military, customs and illegal taskforce from mounting road block with the intent to extort some helpless road users, because this illegal activity is contributory to inflation and economic slowness.