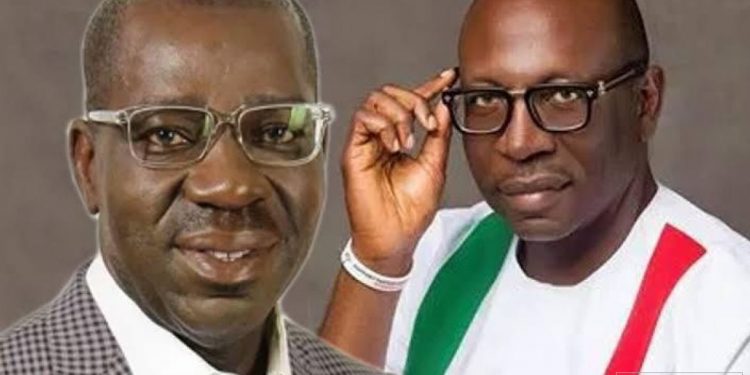 It was really a war of wits, turns and strategy in last Saturday’s governorship election in Edo State. Although about 18 candidates and political parties participated in the election, it was a straight fight between the APC and PDP.
The fight was actually between the dethroned APC national chairman, Comrade Adams Oshiomhole who worked closely with the party’s apex national leader Senator Bola Ahmed Tinubu and Imo State governor, Senator Hope Uzodimma. As a matter of fact, Oshiomhole campaigned for the AP C candidate as if he was the one contesting the election. On the other hand, Rivers State governor, Chief Nyesom Wike, Oyo State governor, Seyi Makinde and Sokoto State governor, Rt.Hon. Ahmed Tambuwal.

The interpretation now is that, it will be taken for granted that the Tinubu/Oshiomhole presidential ambition for 2013 is now in jeopardy.

The Independent National Electoral Commission, INEC, by Sunday afternoon declared the candidate of the Peoples Democratic Party, PDP, and of course the current governor of Edo State winner of the states gubernatorial election. Recall that Obaseki had in a final campaign rally in Benin City, said that with the support of Edo people and the endorsements by over 100 groups in the state, he was certain of victory. After collating results of eighteen local governments in the state, INEC announced Obaseki winner of September, 19, 2020 governorship election. INEC’s Returning Officer, Prof. Akpofure Rim-Rukeh, announced the total result of the election.

Obaseki secured 307,955 votes across 18 local government areas to defeat Ize-Iyamu, who polled 223,619 votes.
Candidate of the All Progressives Congress in Saturday’s governorship election in Edo State, Osagie Ize-Iyamu, has faulted the process that led to the emergence of Godwin Obaseki of the Peoples Democratic Party as winner.
In a post on his verified Twitter account, Ize-Iyamu claimed his supporters were prevented from voting.
He said he was still studying the results along with other APC members and will announce his next move soon.
“I thank and appreciate my supporters, who had to endure many evils including being prevented from voting, for their support and determination during the election. I assure you all that I am studying the results along with other party members and will announce my next move soon,” he said.

APC is said to have rejected the election and will possibly be heading for the court. Wike said it was victory for democracy, while Oshiomhole has been speechless.

Uzodimma makes case for Imo Schools of Nursing and Midwifery

Don’t be fooled, no evil in divination