We are taking them from street to Stars — Anusiem 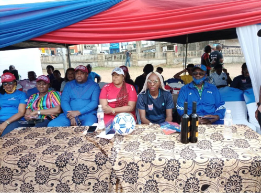 The proprietor and sponsor of Imo Angels Football Club, Jennifer Anusiem, have restated her resolve to contribute to the growth and emancipation of the girl child in our society using the club as a spring board.

She made the statement while expressing appreciation at the unveiling of the new female football outfit in the state at the City Development School, Owerri at the weekend.

The Club is a subsidiary of Jenny Uzo Foundation, a Non-Governmental Organization dedicated to empowering and educating the girl child through social projects while offering mentorship.

In her words, “Jenny Uzor Foundation gave birth to Imo Angels and we are giving them the platform, the opportunity to excel with their talents. We started this thing two months ago. I am grateful to all who lent a helping hand. Our responsibility is to take them from street to stars”

In the novelty match that took place between the new team and Rotary Club Football Club, the Angels held the Rotary team spell bound, not to rotate even once as they walloped them with 4 goals that were scored in the second half.

The highlight of the event is the starring of 1996 Olympic gold medalist, ACP Chioma Ajunwa and a 60 year old Barr. Victoria Nlemigbo, who was the former Federal Capital Territory (FCT) Queens chairperson.

Another star performer is the Special Adviser to Imo governor on Diaspora affairs, Celia Hubert Osakwe, UK based a certified referee, coach, and accomplished footballer. It was a delight as they show cased their skills among the younger ones.

In his speech, the Imo State Football Association Chairman, Amanze Uchegbulam described the state as the home of female football in Nigeria citing products like Ann Agumanu, Stella Mbachu, Perpetua Nkwocha, Chioma Ajunwa, as having their roots in Imo. He thanked Jenny Uzo Foundation for taking the initiative to bring back our girls back that are scattered all over other states.

Uchegbulam admonished the footballers to take education alongside their football carrier insisting that while football may bring money education provides a fall back. He advised them to make discipline their watchword or lose out.

The Special Adviser on Diaspora, explained that this program could not have come at a better time than now when there is strident campaign to raise awareness to say no to violence against women, awareness to create equal opportunity for women, awareness for government to focus certain activities for women. She promised to be a good ambassador to place our women in world map.

Goddy Dike, General Manager of the Club promised that the club has come to stay adding that the club has a bouquet of programs to catch them young and take the effort to all the nooks and crannies of the state.