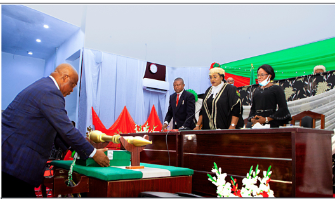 Imo State governor, Senator Hope Uzodimma, has laid before the state House of Assembly, the 2021 budget of N346,169,972,085, christened ‘Budget of Wealth Creation’.
Speaking during the presentation of the budget, Uzodimma said painstaking effort was made to put together the budget that was based on realistic income and expenditure profile.

According to him, the budget provides a roadmap for a post Covid-19 sustainable economic recovery and growth plan.

He summarized by soliciting the support of the legislature towards expeditious passage of the budget, while promising to strive relentlessly to enthrone good governance by providing regular dividends of democracy to the masses, notwithstanding the present economic challenges.

Responding, the Speaker of the House, Rt. Hon. Paul Emeziem, said the legislative arm has had cordial relationship with the executive arm, because according to him, the governor was moving in the right direction in all areas of governance.

He added that there was no reason for crisis when the governor has not done any wrong to warrant such, while promising that the house will expedite action towards passage of the budget
Delivering the vote of thanks, the Deputy Speaker, Rt. Hon. Amara Iwuanyanwu showered praises on the governor for his massive achievements, saying members of the house really have confidence in him.

US election aftermath: Trump says ‘time will tell’ who’ll be in charge in January.