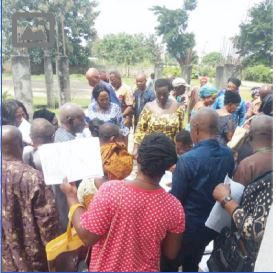 It was another round of agonizing moments for Imo senior citizens as they were once again subjected to another energy sapping verification exercise. Pulling out men and women who should be enjoying their rests back home is considered as an inconvenience and not well received by them.

The elders were subjected to long lines at the office of Head of Service where forms for re-verification of an already concluded exercise during the Ihedioha regime, were distributed under very horrifying atmosphere
Worst still, those who could not get platforms for answering the questionnaire chose available environment to sit like bare floors. Unending queues, confusion and frustration enveloped the exercise leading some of the pensioners swore not to present themselves for this horrendous exercise again.

They viewed the exercise as delay tactics designed to deny them of their rights. An aggrieved elderly woman queried, “this people cannot mean well for us. When will this exercise ever end? I cannot count how many of such exercises”, she lamented.

Some of the senior citizens queried why monthly pension is taking such hazardous stance while nothing has been said about their gratuities. Many of the retirees complained further on the irregular payment while a great number complained of the non-payment of many months.

A greater number bemoaned their arrears of which ran to many months. The exercise which started last week seemed to be unending.

Eating too much of these 9 popular foods may kill you

Eating too much of these 9 popular foods may kill you