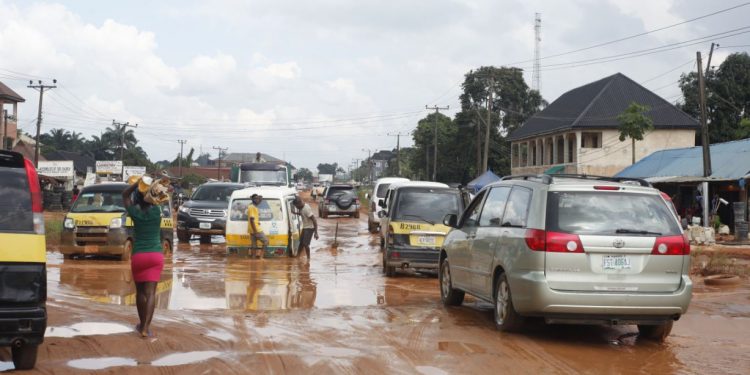 Have you traveled from Owerri to Onitsha recently? I am convinced that you did not find it easy crossing a part of the Mgbidi road. A stretch along the Mgbidi axis of the road has become a nightmare to road users because a portion of the road has gone so bad to the neglect of the authorities. It is disturbing how much inconvenience that is suffered in terms of time lost queuing up in a long stretch of traffic.

Some of the road users try to navigate out of the bad area going through village roads. It is even worse. You will exhaust your purse paying tolls to the unemployed youths who mount check points very close to each other. It will be a sad story for you if you don’t have money to drop. The experience is better imagined because any resistance would attract breaking your wind shield or inflict other damages.

Besides that your vehicle is exposed to serious damage arising from swimming through the many pools of water and bad farm roads. No vehicle goes through that experience and remains the same. Some vehicles break down along the routes and create another traffic thereby compounding a situation for those who thought that they were escaping from traffic jam. Passing along this road will evoke memories of the kind of leadership we have in Nigeria.

It is certain that this portion of the routes did not just break down completely once. It was a gradual deterioration that led to its collapse. And we ask what the authorities did when the break down started and are doing now that it has degenerated so terribly. The Mgbidi road is an inter-state one popularly called federal road. If the federal authorities are not interested in fixing it what about the Imo State government whose citizens bear more the brunt of the damage?

It is true it is a gate way to other areas but what happens when residents of the area suffer emergency health challenges and have the need to ferry people out of the area for better medical attention. For certain several lives would be lost under this situation. This road needs urgent intervention with the volume of traffic that it carries. The bad road has attracted increased transport fare charged by commercial drivers to cover time wastages and other damages and inconveniences plying the route.

It is the same scenario travelling through Aba. We need not stress the commercial value of the Aba route to the residents. This is another federal road. The Abia state government can take pity on these traders and fix the road and later claim from the federal government. A relation of mine who plied the route last Monday recounted that not less than five trucks fell on the way creating traffic and inconvenience to other road users.

It is not just that losses will be suffered by those transporting the goods. Government of these two states including others in the South East and everywhere should empathize with the road users by fixing these roads. Sometimes I wonder if those governing these states fly over these bad portions or they chose to close their eyes and seal their minds against the sufferings of the people.