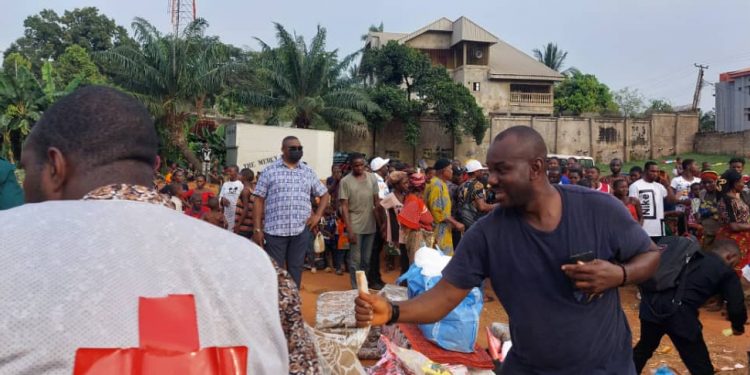 Some of the SEMA/IOM officials during the distribution of relief materials to displaced persons in Onitsha.

The distribution of the items which took place on Friday, November 2, was done under the supervision of the State’s Executive Director SEMA C.y Agupugo at the Onitsha Camp.

Mr. Agupugo disclosed that the state government provided food items like 200 10kg-bags of rice, over 200 10kg-bags of beans, mats, and clothing among others, while IOM partners provided non-food items which include, pots, mattresses, blankets, solar torch lights, buckets to mention a few.

Agupugo noted that the items provided by the IOM would further complement the efforts of the state government in providing for the displaced persons in the state.

He stressed that the State Governor, cardinal agenda of the State Governor, Prof. Charles Soludo had been to improve lives and make the state a prosperous homeland. “Prof. Soludo is determined to reposition Anambra state and introduce a disruptive change that would project the state to global recognition.”

The State’s SEMA boss while expressing gratitude to IOM, urged other agencies and meaningful individuals to partner with Anambra state in cushioning the suffering of the people.

The Project Assistant, IOM, Mr. Hussaini Garga observed that the distribution was a success and had solved the immediate need of the affected persons.

Garga commended the level of compliance among the affected flood victims, the SEMA, and the Transition Chairman of Anambra West, describing it as overwhelming and emulating.

“It is obvious we have achieved the desired goal of putting a smile on everyone involved”. He noted.

He commended SEMA and the State government for the support and understanding they gave to the organisation and as well contributing to the overall intervention to ensure its success through the provision of securities and other logistics.

Thanking the donors for their magnanimity, the Transition Committee Chairman of Anambra West Local Government Area, Hon. Felix Ikechi said that the items donated would help to alleviate the plights of the flood victims.

The Anambra West TC Chairman, who promised that everything donated at the camp would be judiciously utilized, assured the victims that the Government must do everything humanly possible to restart life once again for them.

Solskjaer hits back at Monchi over ‘illogical’ Man Utd comments

2023: Igbo leaders reach out to governors for consensus