.....Insists leaders must walk their talk. 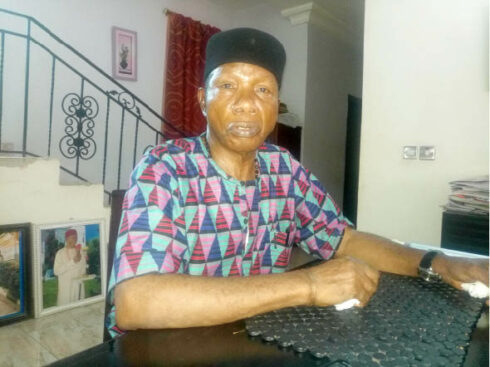 Retired Air Commodore Luke Ochulor and the first military administrator of Delta State has stated measures towards resolving the present crisis that has engulfed the country.
He proffered the solutions at the weekend in a telephone chat with News Echo while reacting to the ugly situation in which lives and properties have been lost.
Stated hereunder are some excerpts of his chat
“Our democracy is a lie, it is fake. How can you have a country where over 70 million out of 200m people are unemployed and if we talk they will say that we are not dancing to their tune, so we keep quiet. The restructuring of Nigeria is inevitable because Nigeria is like what we call super cool water which if touched scatters into bits. Super cool water is unstable.
“The country is in a fluid situation and unfortunately the whole thing came to be mixed with religion. Anything one does people claim that it is against their religion. I am not advocating military regime but we couldn’t have adopted the presidential system of government without researching on it first.

“The problem we have in this crisis is that the urchins have taken control and they don’t have a leader. Remember what happened in Liberia when everybody started following his own leader. It took the whole West Africa including myself fighting here to get Liberia together. You can see how small Liberia is compared to the land mass of Nigeria.
“They should not have allowed situation escalate to this level. My advice is that the leaders should be called from all parts of Nigeria, not just former heads of state alone, to sit down and proffer a solution and beg the youths that enough is enough and that their problems will be solved. When they say it would be solved they should go about solving it.
“Once the situation gets to an insurrection stage it will become disastrous. We are almost there. What causes insurrection is when the correct action is not taken quickly. One of the phases of insurrection is when you kill people in mafia style without minding what will happen and then believing that nobody will catch you.”
On the predominance of the crisis in the south than in the north he had this to say
“That is the jinx of Nigeria formation and condition right from 1914 it has always been like that.If Nigerians were talking with one voice then it would have been easier to solve the problem but you see what I am hearing is that the northerners are alleging that the southern leaders want to destroy their government. It is not their government but the government of Nigeria which is for everybody.
“But when you start appropriating the government it looks like others on the other side are not part of it. By saying that it breeds dichotomy and you can’t bring that at the height of dichotomy. It means that they don’t want the problem solved. It is tough indeed.
“The meeting of former heads of state and past leaders should be supported with provision of security for them to travel. It has nothing to do with APC. The matter has gone beyond APC because it is something that has to do with everyone in Nigeria.
On the presidential address by Muhammadu Buhari, he stated that
“It is not what the president said that matters. It is what would be done. When you allow problem to degenerate to a level where people are being shot at it becomes difficult. When you have issues with your brother resolve it before it gets to exchange of blows. Once there is exchange of blows it becomes more challenging to resolve. This problem could have been solved before the shooting at the Lekki Tollgate. That is what agitated everything.
“When people started agitating over the pump price of fuel, increase in power tariff, Ngige should not have said that we can’t go beyond the level instead of saying that we are going to study it which gives people hope. But when you say that you can’t do anything about it means that he is being autocratic which democracy does not accept.
On the reason why the government is not engaging the youths in resolving the issue, Ochulor said
“There is a standard procedure in handling problems. Once they have become riotous there is no way that you can control them. You discover that miscreants infiltrated them and rubbishing their efforts.
The Mbaise born air commodore also picked holes in the directive given by the National Executive Council (NEC) to the governors to control their state using the police. He queried if they were trained and how are they sure that they can have the command and control of what is available in their state. Have they purged themselves of political leaning and bias? What is the guarantee that they will not come against their opponent, he queried further.