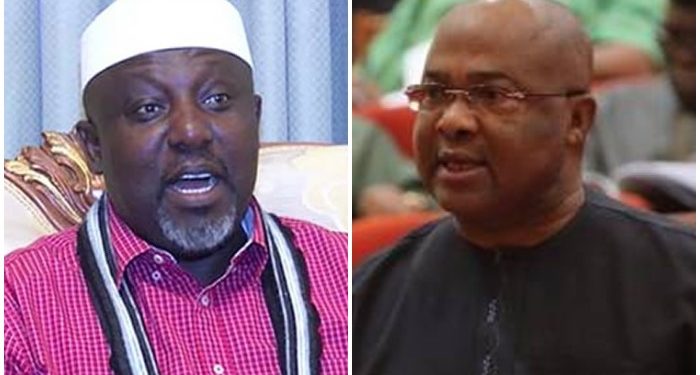 Former governor of Imo State, Rochas Okorocha, has lambasted his successor, Governor Hope Uzodimma, for the demolition of the multi-billion-naira Somtochukwu Hospital, Owerri.
The gigantic edifice, which came under the hammer of Uzodimma’s bulldozers over the weekend, was built by Okorocha in honour of a 10-year old boy, Master Somtochukwu Ibeanusi, who was killed during the uproar that greeted the demolition of Ekeukwu Market in September 2017.

Indigenes of Owerri had protested the destruction of the market by Okorocha, which they described as their ancestral heritage.

Okorocha, who spoke to newsmen at his Spibat Owerri residence on Monday, described that action as a “big economic waste.”

He wondered why Uzodimma could choose to waste such investment, instead of turning it to other uses if he had no need of a hospital in that place.

The former governor, who was short of words, pleaded with the governor not to destroy the legacy of Imo people in the guise of fighting him.

He also wondered the rationale behind the abandonment of the Police and Prisons Headquarters he built, which he said has been rated as the best in the fede6ral Republic of Nigeria.

Okorocha now a senator representing Imo West at the national assembly, enumerated other people oriented projects he built in the state which had either been abandoned or demolished by the governments of Emeka Ihedioha and Uzodimma.

He said, “I have been watching with keen interest developments in our dear state since I left office. It has been one drama after another. First it started with Emeka Ihedioha (former governor) and now Hope Uzodimma. I can understand if they are fighting Rochas Okorocha as an individual, but why destroying the future of the state if the target is me. Why is Hope Uzodimma destroying Somto Hospital, which I built for Imo people? He can choose to turn that hospital into a shopping mall or something, if he did not want a hospital there, but not to pull it down. I cannot understand the rationale behind the action.

“In fact, if I have my way, I will go there and stop it because this is total madness. How can we build the state if the aim is to destroy another person’s legacies,” he said.
Okorocha said that the hospital was part of the 27 general hospitals he built in the 27 Local Government Areas of the state, which have been left in ruins.

Okorocha wondered why a market project should take preeminence over hospital of that magnitude.
Also speaking, the Publicity secretary of the Daniel Nwafor-led faction of All Progressive Congress (APC) Onwuasoanya FCC Jones, described it as a “badly thought-out act of political vendetta.”
He described the hospital as a major legacy of the Okorocha administration which was one of the over 30 hospitals initiated or completed by the administration in eight years of holding sway.

He said, “The hospital built with Imo funds had been fully completed, structurally, while the necessary hospital equipment are the only things waited for the hospital to kick into full operations.
“The hospital is also a major legacy of the Okorocha administration, as it situated at a site of a major market relocated by that administration, in keeping to the advice of respected development experts and safety professionalism, since the said location of the said markets had posed some security and health challenges, as disrupting the modernization and urbanization ambitions of the State Government.

Military confirms killing of scores of terrorists in air strike