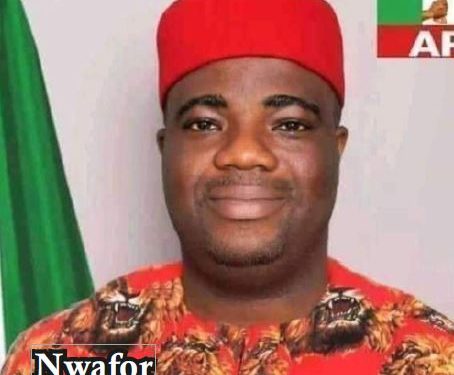 A factional chairman of All Progressives Congress (APC) Imo State, Hon Dan Nwafor has
described his suspension from the party as a huge joke and laughable.

He stated this in a telephone chat with News Echo while reacting to the news of his suspension which
he claimed had no national input but orchestrated by another factional chairman, Barr Marcellinus Nlemigbo.

Dismissing the alleged suspension, Nwafor indicated that the so called suspension did not originate from the national oﬃce that is in court with him. It is Nlemigbo that is orchestrating all these drama.

According to him still, the so called suspension did not follow any rule in the constitution of the party which requires that the suspension should originate from the ward level. “I am still in good standing with my ward”

He reminded that Nlemigbo who was suspended by his ward since 2019 has no locus standi to talk about his suspension because according to him, he has no such powers. “He is not even a member of the party” He tendered documents to reporter to conﬁrm the suspension of Nlemigbo.

He declared “for now they are acting on illegality until a competent court rules otherwise. But for now i am the state chairman of the party.

Concerning the party’s instruction to withdraw all suits by all aggrieved party members Nlemigbo who he is not in compliance with he stated this, “the party gave orders for suits to be withdrawn but the APC has agreed in their letter to INEC that they took me to Court. So it is hypocrisy. So APC themselves that they gave the order and I are now in court.”

When queried on what basis he is insisting to be the party chairman, he remarked that “I have a judgement of court which has not been countered by any other court.” The matter he stated will be heard soon at the appeal court on the Sept 10.

Imo and her one city state of Owerri

Imo and her one city state of Owerri