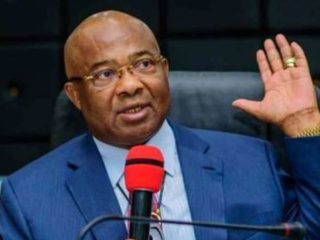 Imo State Governor, Senator Hope Uzodimma, has attributed the clamour for zoning, to abysmal performance of past political leaders.
Senator Uzodimma made the remark in his address during his grand reception by people of Owerri Zone.

The governor said his sterling performance at the end of his tenure will make Imo people to forget their zones.

He promised to reciprocate the gesture of love showed him, describing the honour as a reminder by Owerri people that he must not fail, assuring never to betray the confidence reposed in him.

He solicited the support of all Imolites, saying the time for blame game has gone and that with the cooperation of patriotic minded persons, the government will be able to build an Imo State that will be the envy of all.

The state Deputy Governor, Prof. Placid Njoku, in his remarks, observed that it was the very first time people of Owerri Zone were organising such a grand reception for a sitting governor, which he opined was proof of the support and love the people have for Uzodimma and their belief in his capacity to take the state to the next level

Chairman of the occasion, Chief Emmanuel Iwuanyanwu, described the governor as the hope of a new Imo whose impressive achievement as a businessman and politician was eloquent testimony of his capacity for succeeding in any endeavour he ventures into.

He argued that as an elder statesman and member of another party notwithstanding, he was fully in support of the Uzodimma administration because of its commitment to developing the state.

The occasion attracted dignitaries from across the country, traditional rulers, the clergy, and people from all walks of life.