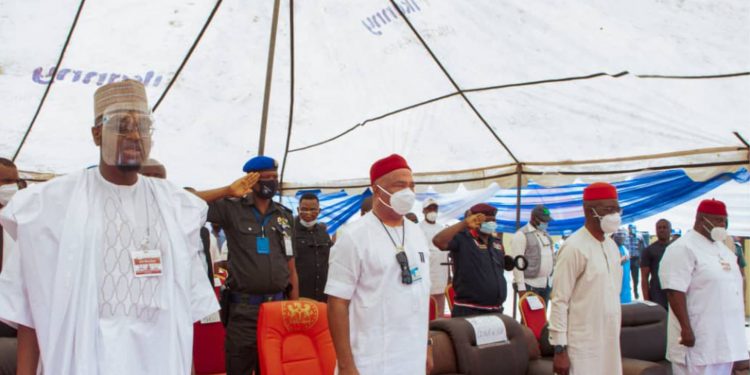 0
SHARES
48
VIEWS
Share on FacebookShare on TwitterShare on Linkedin

Nigerian Minister of Communication and Digital Economy, Ibrahim Pantami has disclosed that Imo State is one of the states that are very dear to President Muhammadu Buhari, reason the federal government has embarked on numerous projects in the state.

The minister made this disclosure in his speech during the commissioning ceremony of an emergency communication centre in Imo State, which was made available by President Muhammadu Buhari, through the Nigerian Communication Commission.

He posited that the federal government has executed a lot of projects in the state, through the ministry and other agencies, while some are still ongoing.

Speaking about the emergency communication centre, he said it is key to tackling the security, health and any type of emergency that may be witnessed in Imo State, as it has the capability to link people up with the relevant interventionist agencies in the time of emergency, with a toll free call, through the toll free emergency number, 112 to the centre that operates 24 hours a day and seven days a week.

The minister eulogized the state governor, Senator Hope Uzodimma for the feat he has achieved within the short time he has been on the saddle, especially in the area of security and the policy of continuing projects started by past administration.

In his speech, Imo State Governor, Senator Hope Uzodimma appreciated the federal government for the centre which he said, aided the state in the fight against Covid 19 and implementation of primary health programmes.
The governor made it clear that through the centre, the state received numerous distress calls which it responded promptly to, adding that it has also helped to reduce the crime rate in the state.

He thanked the Minister of Communication for training over 100 Imo youths and giving them start-ups to make ends in the Information Communication Technology.

The governor pointed out that the state, especially the higher institutions in it have benefited immensely from the ministry.

He assured the president, through the Minister of the continued support of government and people of the State to his government for all its laudable programmes.