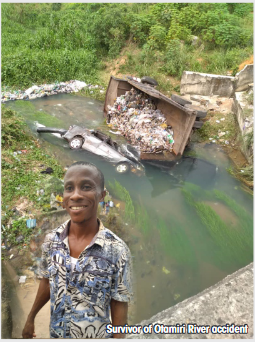 0
SHARES
118
VIEWS
Share on FacebookShare on TwitterShare on Linkedin

A road accident survivor, Kennet Nze, has narrated how his brother nearly got drowned at the popular Otamiri River when truck laden with waste pushed his car and another into the Otamiri River.

The accident, which occurred last Tuesday, claimed the life of the truck driver, while Kenneth and his younger brother, whose car was totally submerged into the river escaped miraculously.

Narrating what he described as ‘God’s mercy, ‘Kenneth, who hails from Egbelu Uvuru Mbaise, said, “I and my brother were travelling back to Port Harcourt after conducting our business in Owerri. But somewhere along Akachi road, we saw a truck laden with wastes going on a snail speed and the driver trying hard to keep track on the road. All the vehicles in front managed to manoeuvre from a narrow path left by.

When it was our turn, I wriggled our way passed the truck, after an Avalon car in the front.
“I followed the Avalon closely, giving the truck a big gap. We met traffic gridlock. The truck, climbing down the hill, lost control and hit us from the back.”

“But just as I stopped, what I heard at the back of my car, a Golf, was a big bang. From that moment, I lost control only to find me and my brother completely inside the river, our car completely submerged. Not knowing the depth of the river, my only thought was that we are dead,

“But I managed to lift my head up from the window and swam out of the river. At that time, I started looking for my brother. I was shouting his name, but no answer. Instinctively, I thrust my hand into what appeared to me as the back seat of the car and surprisingly touched my brother’s head. I put my hands further and tried to grab him by his shirt, but I could not as I realised that he was on a seat belt as we were driving.

“But I made further effort and as God will have it, I managed to pull him out. He was immediately rushed to the hospital because he was gasping for breath and almost passing out after swallowing many gallons of water.

“We really thank God for the miracle survival because after he was revived, my brother told me that he was hearing my voice faintly as I was calling him, but could not do anything because he was tied down by the seat belt. He however said that he was emboldened to release the seat belt when he felt something like a hand touching him.

Kennet, a plumber, thanked God for saving his life and that of his brother. He also said that three brothers in the Avalon car also miraculously escaped while the only casualty was the driver of the truck.
The victim recounted that one of the passengers of the truck died at the spot, because the door or the vehicle hit him on the chest as there was no one within to rescue him.

Kenneth expressed bitterness that government barricaded the Aba Owerri Road, warranting them to struggle on the Akachi Road. He called on government to stop blocking the road to avoid more accidents.