How I got NSCDC to bear arms – Nwachukwu 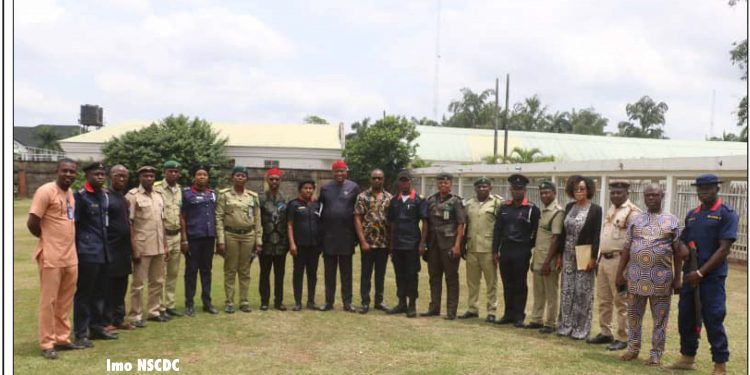 The special Adviser to Governor Hope Uzodimma oflmo State on National Assembly and Ecological projects, Honourable Austin Nwachukwu has disclosed that he was responsible for getting the approval for personnel of Nigerian Security and Civil Defence Corps (NSCDC) to carry arms. This was borne out of a firsthand witness where the corps members were left helpless during a robbery incident because they were unarmed.

Nwachukwu who was also a former legislator at the House of Representatives disclosed this while playing host to a group of paramilitary officers from Okigwe zone in his office.

The paramilitary officers were those he assisted in obtaining employment during his tenure as a Federal House of Representatives member for Okigwe South Federal Constituency.

“It was my motion on the floor of the house in 2008, there was nothing like arms then. I checked the act establishing the NSCDC, and saw the caveat in section 3, sub section 3, that says the Commandant General can maintain an armed squad and I hinged my battle on this and moved the motion obtained the approval with the help of former Mi nister fo r Interior , Brig.Gen.Godwin Abe(rtd) and that of Defence, Alhaji Yayale Ahmed.”

He stressed the need for people occupying privileged positions in society to use such positions and contacts to empower unemployed youths and less privileged people around them.

The Special Adviser was of the opinion that it was the responsibility of those on whom public trust has been placed to ensure that teeming unemployed youths in their communities are assisted.

Nwachukwu recalled that over four hundred youths from his federal constituency were assisted by him to obtain employment into Nigerian Security and Civil Defence Corps, Nigeria Immigrations Service, Nigeria Correctional Service, Nigeria Customs and Railway Services.

He expressed joy and sense of fulfillment that none of those youths he assisted had disappointed him, but were rapidly climbing the corporate ladder in their careers.
“Someone was instrumental to you being where you are, therefore you also should be for someone else”, he emphasized.

The paramilitary officers who were led by Chief Superintendent Akuwuogu Oby Rich of the NSCDC, Imo State command , said they came to felicitate with him on his appointment and expressed appreciation to him for assisting them to obtain employment during his tenure as a member of the Federal House of Representatives fo r Ehime Mbano Federal Constituency.

Ihitte Uboma and Obowo They made it clear that by that singular act he has lit so many lights in families that were in darkness.